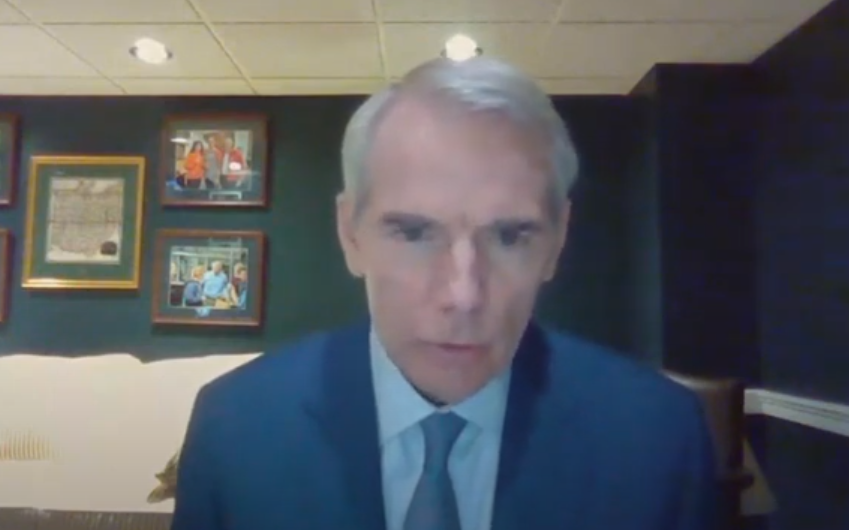 Senator Portman: “Thank you, Mr. Chairman, and thank you, Mr. Secretary, for being here. I’ll get right down to my questions. As you know from Senator Shaheen’s comments, I was on this congressional delegation recently to Lithuania, to Ukraine, and to Georgia. We spent quite a bit of time talking about the Belarus issues in Lithuania, including meeting with the opposition leader. I want to start by just saying it won’t surprise you to hear that I strongly disagree with the administration’s position on Nord Stream 2, which is a reversal of a previous position. And waiving the congressionally mandated sanctions on Nord Stream 2 is going to have a detrimental impact on these other countries in the region, particularly Ukraine, where the pipeline goes through Ukraine, where there’s about a $3 billion fee that is badly needed in Ukraine these days. And that’s in our interests.

“But one issue that has come to my attention that I had not fully realized was the threat they’re feeling, not just from their eastern border, where Russia has recently sent 110,000 troops and left equipment there, by the way, and left most of those troops, but also on the northern border with Belarus, where Russia’s military presence is increasing. So more and more pressure on them. And again, something that perhaps isn’t fully understood is that the pipeline itself, in a way, was a way to encourage the safety of Ukraine and that Russia would be unlikely to want to destroy its own pipeline should it make a mistake and engage in further aggression towards Ukraine.

“So can you comment on why you changed your mind? I assume you have already talked about this today. I wasn’t able to listen to all the testimony. And how you answer Ukraine when they say, among other things, that no one even bothered to talk to President Zelensky about it before this decision was made.”

The Honorable Antony Blinken, Secretary of State: “Thank you very much, Senator. Yes, we did have an opportunity to talk about this a little bit before, but just to focus on it again, first, let me just say, President Biden spoke to President Zelensky today. He invited him to Washington in the coming weeks. And they had a very good conversation. Also, for the record, we did share with our Ukrainian partners our intentions when it came to the pipeline. And maybe that information didn’t get directly to President Zelensky. It certainly should have.”

Senator Portman: “Well, I think it certainly should have been communicated to him. And by the way, I do appreciate the fact that the phone call was made. Thank you. I’m sure you played a big role in that. Not as good as having Georgia and Ukraine present, at least for, you know, a 10 or 15 minute session with the NATO summit. And that’s what I think is really needed, because otherwise it just sends the wrong signal to Russia. And this is something that I know you understand well, but these signals are important and it’s the narrative and it’s the disinformation that Russia will now engage in that makes it even more difficult for Ukraine at a very difficult time.

“I won’t ask you to go into your explanation. I’ll find it from the previous questions. But I must say, I’m disappointed. And I know that you yourself had a strong view on this at one point, that Nord Stream 2 is not something that was in our interests.

“With regard to an ambassador to Ukraine, we’ve got a good career team there, as you know. You were there recently. Thank you for making the trip. We need an ambassador. I assume you heard this from all the folks in the government in Ukraine as we did. I’ve been there with an ambassador and without an ambassador and it’s a big difference. And as you know, we came very close to getting General Dayton through the process last time. Why have you all not nominated someone? And what’s your plan on nominating an ambassador for Ukraine?”

Secretary Blinken: “Thank you, Senator. We’re trying to move forward on that as quickly as possible. And we have a process that I’m sure you’re familiar with at the State Department in terms of putting forward ambassadors. We are in the midst of that process now. And I anticipate that will happen in relatively short order. But let me just say that is a priority for us and for the president. I want to make sure that we have the strongest possible person leading the strongest possible team in Ukraine.”

Portman: “Well Mr. Secretary, when you nominate someone, I assume it will be a career person who has a good background and I’m glad you’re looking to someone who has experience because it’s a critical post. But I’ll be one of those who will be very eager to help you get that through the process as quickly as possible. I know the chair and ranking member will agree with me.

“On the NATO MAP issue. In 2008, then-Senator Biden introduced a resolution calling for a NATO Membership Action Plan for Ukraine and for Georgia. And by the way, that was the same year as, you know, that NATO said they were going to have both Georgia and Ukraine come into NATO, it was just a question of when. That resolution passed the Senate easily. It had the support of a lot of members, including a senator named Obama, one named Clinton, one named McCain. Totally bipartisan. Does this administration still support a Membership Action Plan for Ukraine and Georgia?”

Secretary Blinken: “We support Ukraine’s membership in NATO. It currently has all of the tools it needs because since the Membership Action Plan was created, a number of other very important tools were developed to help countries prepare for possible NATO membership, including an annual program that Ukraine benefits from. In our estimation, Ukraine has all the tools that it needs to continue to move forward in that direction. And so we are working with it on a virtually a daily basis. MAP itself would have to be done in full consensus with other NATO members.

I think there are some countries that are less supportive than others of that right now. But irrespective of MAP, Ukraine has the tools it needs to move forward toward being ready for membership in the future. The other piece of this, though, is, as you know and given all the time and investment you’ve made on this, as important as its preparations militarily, strategically, is the preparation when it comes to having good governance and dealing with the aggression that’s eating at Ukraine from within, and that is corruption, and a system that works effectively to deal with it. So what we also need to see from Ukraine is continued progress on that level as well.”

Senator Portman: “Well, and of course, there’s been enormous progress made. We look back only to 2014 when that began and the electoral changes, the judicial reforms and others, some of the economic reforms have been substantial. And I agree more needs to be done and more has to be done, frankly, I think, in order for NATO membership to be completed. But I would hope as I said earlier about the narrative that we’re not backing off on the Membership Action Plan, understanding that you’ve got to convince the other NATO members to go along. The United States tends to have significant influence in NATO and we’re their champion. We are the country they look to and they are under enormous pressure right now. This buildup on the eastern border is something that mystifies everybody except that Russia must have some designs on continuing their aggression and holding onto Crimea and the Donbas, and then again, what’s happening in Belarus is an additional very serious concern. So my time is probably over. But the Global Engagement Center that we talked about, and we look forward to following up with you about the Global Engagement Center budget requests.”