WASHINGTON, DC – Today, U.S. Senator Rob Portman (R-OH) spoke on the floor in honor of the life of Navy Fleet Marine Force Hospital Corpsman Max Soviak, a native of Berlin Heights, Ohio, who was one of 13 U.S. service members killed in a suicide bombing in Kabul, Afghanistan, on August 26 as part of U.S. efforts to evacuate Americans and Afghan allies from the country. 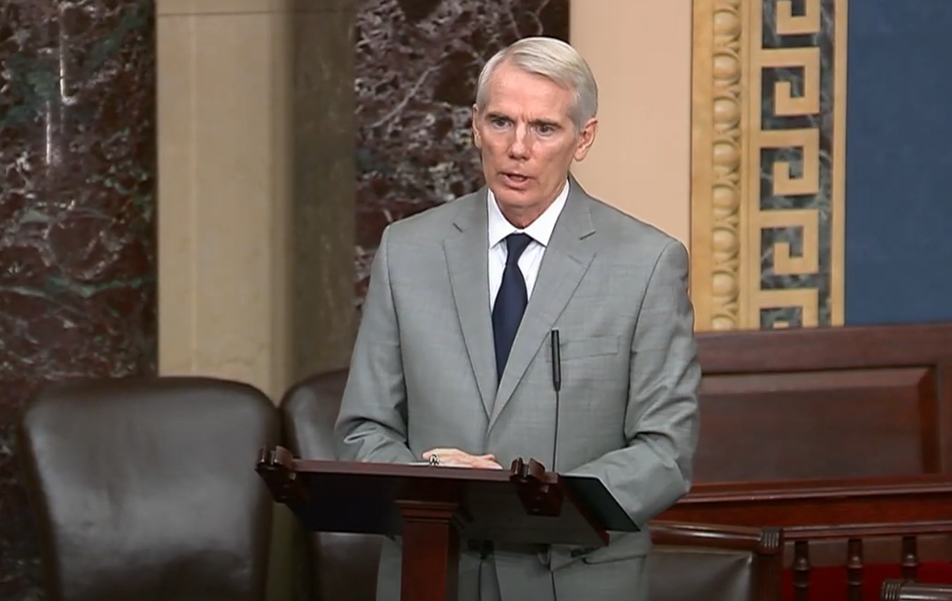 “Madam President, I’m here today on the floor to remember the life of Navy Fleet Marine Force Hospital Corpsman Third Class Maxton Soviak. Max was a 22-year-old native of Berlin Heights, Ohio – a young patriot who died far too soon in service to all of us. Max was one of the 13 brave American servicemen and women who were tragically killed when an ISIS-K suicide bomber in Kabul on August 26 exploded a bomb that wounded dozens of others and killed many Afghans. He was there working to evacuate Americans and Afghan allies from a city that was suddenly overrun by the Taliban.

“Max was a special guy. They say he was quick to make friends and quick to earn the respect of those he interacted with. As a student at Edison High School, Max was a member of the wrestling team that won the 2016 state championship and a football team that made it to the semifinals two years in a row. He was an athlete and a leader. He achieved the rank of Life Scout, the second highest rank a Scout can reach. He was a lover of the outdoors, spending his free time doing rock climbing, skiing, scuba diving, and other extreme sports.

“And he was one of those rare individuals who, at a young age, had that drive to defend his nation as a member of the United States Armed Forces. He joined the Navy and was assigned as a Fleet Marine Force Hospital Corpsman serving side by side with the Infantry Marines of the Second Battalion, First Marine Regiment. Affectionately known as a Devil Doc, a take-off on the Marines’ Devil Dog nickname, Max was a member of a select group of medical specialists trained to operate side-by-side with the men and women of the United States Marine Corps on the front lines, just as he was doing in Kabul the day he died, helping evacuate Americans and our allies who were fleeing the tyranny of the Taliban.

“In his far too short time with us Max did his duty, and he did it with distinction and valor. He took care of his Marines and while in Kabul, cared for innocent Afghans who were fleeing the Taliban. Kathleen, Max’s sister, said it well: ‘In Maxton’s final days, he spent his time helping others stay alive as he had developed a passion for saving the lives of others, so much so that he was willing to risk his own life, and made the ultimate sacrifice.’ So true.

“Before the attack in Kabul, Max was able to FaceTime his mom, Rachel. As they said their goodbyes, his mom told him to be safe, Max replied, ‘Don’t worry, mom. My guys got me. They won’t let anything happen to me.’ That was the last time she spoke to him before Max and his fellow Marines and soldiers gave their lives in service of keeping so many others – moms, dads, kids and fellow service members – safe. He didn’t want anything to happen to us.

“For his bravery and sacrifice Max was awarded a Purple Heart and a Combat Action Ribbon. And when he came home to Berlin Heights, Ohio, he was greeted with a hero’s welcomed that he richly deserved. Families lined the streets as his casket draped, in the American flag, was brought home to his family. When I visited his home town over the weekend to deliver an American flag flown over the United States Capitol in honor of his service, there were flags in every yard and posters and flowers. You could sense the love and support for Max and for his family from his grateful neighbors. Yesterday hundreds came to the Edison High School football Stadium where Max had helped lead the Chargers to victory time and time again. They came to pay their last respects to an honorable American life taken too soon in service of all of us.

“Max’s sacrifice, along with that of the other Marines and soldiers who died or were grievously wounded that day, reminds us of how blessed we are to have such courageous and selfless fellow citizens willing to stand guard for us. We must be grateful for the sacrifices our troops make every day to keep America safe. My thoughts and prayers are with Max’s parents, Kip and Rachel Soviak, and his entire family, as well as those he knew and who loved him. May God comfort them in the days and weeks ahead.”