On Senate Floor, Portman Questions Why Democrats Are Focused on Providing Tax Benefits to the Wealthy

On Senate Floor, Portman Questions Why Democrats Are Focused on Providing Tax Benefits to the Wealthy

WASHINGTON, DC –  Today, U.S. Senator Rob Portman (R-OH) delivered remarks outlining his concerns with the State and Local Tax (SALT) deduction provision in Democrats’ massive tax and spending proposal. In the House-passed reconciliation package, the $10,000 cap on SALT implemented in the 2017 tax reforms is raised to $80,000, creating a tax break that almost entirely benefits only wealthy Americans. Portman noted that this increase will cost as much as $100 billion more than the Child Tax Credit, which Democrats claim is the cornerstone of their entire spending bill.

Portman believes these tax breaks for the wealthy, combined with the stimulative spending and job-killing tax overhauls on working families and businesses, are reasons why Congress should not pass the Democrats’ partisan reconciliation bill. 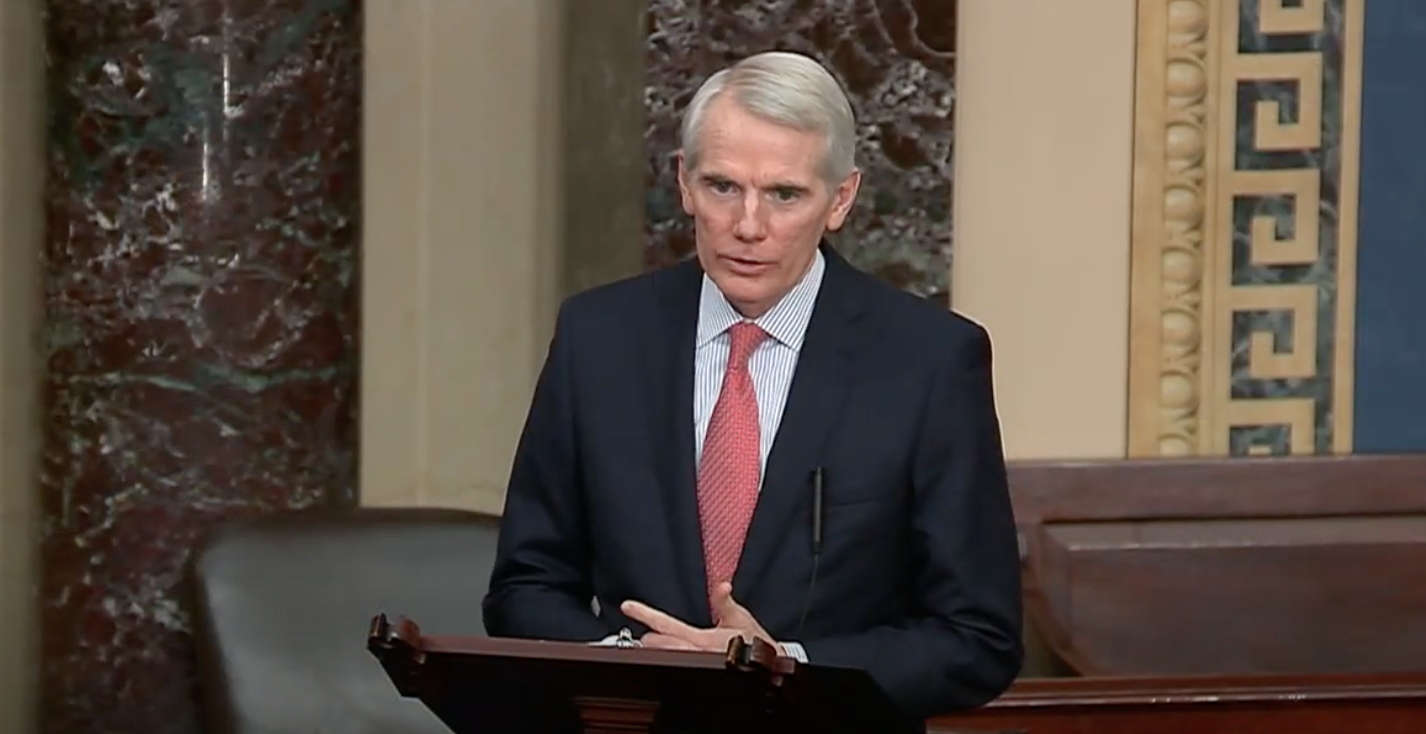 “I’m here on the Senate floor again this evening to talk about the so-called Build Back Better legislation. This is legislation that Democrats are trying to push through the process here on a purely partisan basis under what’s called the reconciliation process. I believe this massive tax and spend bill is irresponsible at a time when we see an uncertain economy, thanks in large measure to all of the challenges we are now finding with regard to COVID and Omicron, in particular. At a time of really high inflation that’s hurting my constituents and everybody’s constituents in this chamber. And at a time of record levels of debt. Certainly this is not a time for us to put out another piece of legislation that spends dramatically more money and also has big tax increases on the economy.

“This is the 10th consecutive week while Congress has been in session that I’ve come to the floor to talk about reasons I believe this legislation is bad for America. As we’ve talked about before, this massive new spending bill represents the largest amount of spending of any legislation ever passed by the U.S. Congress. This is a big deal. Now, some would say, ‘Well, the official score is only $1.7 trillion, so it’s the second largest, because the first largest would be the $1.9 trillion that was already spent earlier this year.’

“That’s fine. You can say that. But what sets this legislation apart, as a number of analysts have shown us, including the Penn Wharton study, is that a lot of the spending in this bill, the costs of the bill, have sunsets, so it camouflages the full cost of the bill. I’ll give you an example of one of the major spending priorities that’s going to end up costing a lot more than estimates say. The enhanced Child Tax Credit from the March spending bill is extended for one year in this legislation, which means that after next year, this new benefit people have come to expect would be cut off. Based on the history here in Congress, that’s not how it operates. Benefits like this are not ended. So if it doesn’t end and these programs end up not being sunset, Penn Wharton estimates that the total spending on this bill goes from around $1.75 trillion to about $4.5 trillion dollars – wow – more than double the largest spending bill ever considered by the U.S. Congress.

“At a time of record debts and deficits, my hope would be that Democrats and the Biden administration have come up with a responsible way to pay for this multi-trillion dollar reconciliation package. Unfortunately, some of us have been arguing for months that this legislation is about as far from being responsibly paid for as you can get. One of the primary sources of proposed revenue is a series of tax hikes that, despite what Democrats might say, hits the middle class, hits families in the middle class, hits small businesses the hardest. As an example, the proposed Medicare surcharge on active investment income is going to hit millions of small businesses that structure themselves as pass-throughs with a new across-the-board 3.8 percent increase on all income.

“Proposed corporate tax increases will hit American workers based on the analysis of the nonpartisan Congressional Budget Office and the Joint Committee on Taxation. They say that when you increase the taxes on businesses, the main impact is to increase taxes on workers. Why? Because wages and benefits are reduced because of it. Costs will be passed down to working families, this means higher prices for everything.

“What’s even worse is that while the worker making $20,000, $40,000, $60,000 a year is getting hit hard, having to pay more because of inflation for gas, groceries and clothes, at the same time wealthy Americans under this legislation would get a tax break worth hundreds of millions of dollars thanks to the Democrats’ insistence on raising the cap on what’s called the SALT, the state and local tax deduction. As part of the tax cuts back in 2017, we decided to limit the deduction you could take for state and local taxes to $10,000 per year. Why? Because it was very expensive to have that deduction out there. Because it’s regressive, helps wealthier Americans much more. Because it’s ineffective policy that leads to an incentive where states are incentivized to raise their taxes because people get a federal tax deduction for it. And it’s just not fair. My constituents in Ohio are subsidizing New York and California for their high taxes. That doesn’t seem to make sense to people.

“However, under this Build Back Better bill that was passed by the House, they raised that cap from $10,000 up to $80,000. Over the next five years alone that provision would cost $285 billion. The vast majority of that tax benefit would go to the wealthiest Americans, with one recent analysis from the Tax Policy Center finding that almost no benefit will go to Americans not in the top 10 percent of income earners. Conversely, the Child Tax Credit expansion, which Democrats argue is designed to help lower and middle-income Americans, cost $185 billion. So $285 billion for the SALT, which primarily goes to wealthier individuals, 185 billion is put in place for what is viewed as the cornerstone safety social net program in this whole bill. So there's $100 billion more in the regressive tax cut than there is in this cornerstone social safety net program.

“As Marc Goldwein with the Committee for Responsible Federal Budget put it, ‘We’re debating about whether to give lower and middle class families $1,000 more a year for the child tax credit while giving upper-class families $10,000 or more through SALT.’ That’s pretty accurate. Through lifting the SALT deduction and a number of other poorly planned tax overhauls, under the so-called Build Back Better legislation, almost 70 percent of people making $1 million or more a year, almost 70 percent of them, so over 68 percent, will get a significant tax cut. So if you make over a million bucks a year, 70 percent are going to get a significant tax cut.

“Nearly 90 percent of taxpayers earning between $500,000 and $1 million are going to get a significant tax cut. Contrast that to people who make $30,000 a year, as an example. While 70 percent of those making $1 million or more get a tax cut, only 30 percent of those making $30,000 a year or more are going to get a tax cut. And guess what? That’s in the first year. In the second year, it goes down to 12 percent. In the third year, it goes down to 10 percent or less, and then it goes to single digits. So if you make $30,000 a year or more, you got really no significant benefit here at all. But if you make a lot of money, you get a huge benefit. That doesn’t make sense.

“For example, in California, where there are graduated income tax rates of over 10 percent – that’s the state income tax rate – that would amount to a $47,000 deduction, on average, for somebody making $500,000 a year. That’s a lot. While the average taxpayer in California is only seeing a $20 per year benefit. So again, you’re getting a deduction of about $47,000 if you make over $500,000, whereas the average taxpayer is only going to get about a $20 a year benefit. That doesn’t make sense. It doesn’t make sense to Americans as they learn more about this.

“The people I represent in my home state of Ohio are very concerned right now about the economy, particularly about inflation. They’re worried about rising prices for everything, from gas to groceries. They’re worried about the fact that their hard-earned paychecks aren’t going as far as they did just a few months ago. Back in March, when the Democrats pushed through that $1.9 trillion spending package, many of us on this side of the aisle tried to warn them that this stimulus was not needed to get the economy moving. The economy was going ahead on its own at that time. And yet the stimulus was thrown into the economy, which we said would overheat the economy. And it wasn’t just Republicans. Larry Summers, who served as the Treasury Secretary for President Clinton and Director of the National Economic Council under President Obama, warned that injecting so much money into the demand side of the economy would lead to inflation. He was right.

“Now the same lawmakers are gearing up to do it again. Not only does Build Back Better deal an unfair hand to the working families they claim to champion, giving a tax break to the wealthy and leaving other Americans struggling to get by, it will stoke more inflation by pumping more money into the demand side of the economy. That’s not what we should be doing now.

“Ultimately, the American people are going to have to look at this reconciliation package, this so-called Build Back Better package, with its job killing tax hikes, tax breaks for the wealthy, and stimulus spending, and judge whether it’s the right thing for the economy right now, as we grapple with high inflation and struggle to get out of this pandemic. It’s certainly not the right thing. It’s not in our national interest to be providing tax breaks for the wealthy and burdening our businesses and everyday taxpayers with higher taxes while stoking more inflation.

“We’re dealing with a host of economic challenges right now, from inflation to supply chain delays to Omicron to workforce shortages. As we seek to overcome these challenges, let’s not Build Back Worse.”