WASHINGTON, DC – Today, by invitation from the Chairman and Ranking Member, U.S. Senator Portman (R-OH) addressed the Senate HELP (Health, Education, Labor, And Pensions) Subcommittee on Employment and Workplace Safety’s hearing examining how to get Americans back to work, particularly through apprenticeship training programs.

Portman discussed how his bipartisan JOBS Act – bipartisan legislation he introduced with Senator Tim Kaine (D-VA) – is an important step in helping Americans gain access to short-term training programs, which provide valuable skills training in a number of middle-skills areas, and in turn a higher chance of finding a job. Senator Portman hopes that his colleagues in the Senate will support the legislation to ensure we can begin to fill the jobs' gap that we see today.

A transcript of Portman’s remarks can be found below and you can watch them here. 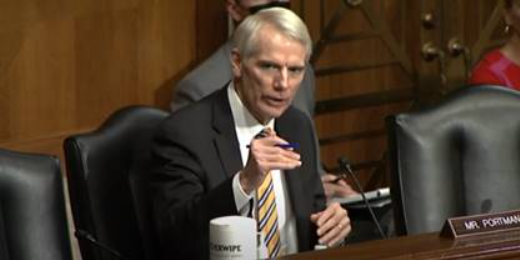 “Well thank you Chairman Hickenlooper and Ranking Member Braun. And all of my colleagues here on this committee. I’ve always wanted to be on the HELP Committee and here I am at the dais. This is unbelievable, thank you.  Listen, I am here with friends and the two of you, in particular, being employers in your previous incarnations. I know everybody on this panel has a passion for this, this training issue is huge. Senator Kaine and I have been trying, so far unsuccessfully, although we came very close in the so-called Endless Frontier Act, to get a program in place that many of you are very familiar with. I know Senator Braun, Senator Baldwin, and others have worked with us, to get people to the point where they can get these short term certificates and have the federal government help them.

“We spend so much money as the federal government on higher education and I’m not against that but, my gosh, shouldn’t we be spending some money on actually training people up for the jobs that are right there and available now? Where they’re not going to have a big debt, where they’re going to go right into buying a house and buying a car and being able to get this economy moving. So that’s what this is about. Our economy post-COVID-19, we’re still in this COVID-19 pandemic, but in this time period needs this more than ever.

“I cannot tell you an employer that I’ve talked to in my home state of Ohio, and I know the same is true in all of your states as we’ve talked about it – we had a conference call this morning with the oil and gas industry in Ohio and what did I hear about? Number one issue, workforce. Number one issue. It’s truck drivers, it’s technicians on the well sites, for the disposal wells to have some way to just find people to do the work. So this is a critical issue for our long-term economic health and right now more important than ever, I do think it’s about the entire economy so I’m not suggesting it’s all about middle-skills jobs, which is what economists call these jobs that don’t require a college degree but do require some advanced level of training – that has been the real problem in our economy the last several years. It’s about everything right now, let’s be honest. It’s about hospitality. Its executives, so called white-collar jobs. Still the biggest concern I think is among these middle-skill jobs and this morning, just while I’ve been here, I’ve gotten to hear some really exciting news about with your high schools and your technical education programs.

“Senator Kaine, who you’ll hear from in a moment, and I are co-chairs, along with Tammy Baldwin – probably all of you are on it – the CTE caucus here. In the Senate, we have a caucus to promote career and technical education. We’ve passed some legislation to get the federal government funding increased and to provide more standards for CTE and improve CTE. That’s all good but in my view that’s not going to solve the problem because career and technical can’t provide the level of training that most of the employers need to be able to fill these so-called middle-income jobs. These are jobs like welders and machinists in factories. One of the people on the call this morning was a manufacturer who provides something for the oil and gas industry and he can’t find welders, which isn’t a surprise I’m sure to anybody on this panel. It’s truck drivers, its logistic experts, its coders, its people who can help program these computers that are running every factory in America and most of our lives. Those are the middle-skill jobs.

“So our idea is really very simple, it is to provide this Pell grant funding, not just for a four-year or two-year degree, but also provide it for these relatively shorter term training programs. It gives someone an industry recognized certificate at the end of the process and the success of these programs is unbelievable. We heard about some of this again today, but if you can see the light at the end of the tunnel, which is after 10-12 weeks you can actually get a degree that will get you a job, you’re much more likely to stick around. Unfortunately with Pell, in our higher ed level – we’ve had this discussion in this committee – most of the students do not get a degree. Most of the students do not get a degree.

“Now, again, I’m for Pell in higher ed, I think we can improve them and that’s good but shouldn’t we also permit it for this other purpose these students are pretty much all going to get this certificate. And when they get that certificate, get a job. We’ve all had that situation where someone does get that degree in college, by the way, and they don’t have a job at the end because they haven’t developed a skill that’s actually needed in the economy, so it’s connecting that and no better way to do it than CTE and these shorter-term skills programs that Senator Kaine and I have been promoting.

“The JOBS Act now has 39 co-sponsors, including Ranking Member Braun. I’m grateful that HELP has agreed to some of the bipartisan changes to improve the bill along the way and allow it to advance to the Senate floor. Again, we almost got it done. It was in the manger’s amendment for the so-called Endless Frontier bill. I would urge members to take a look at it. If you can help us with it, that would be great. My hope is that we will find a vehicle here this year to be able to move it forward.

“So I thank the witnesses for being here today, all of you and what you are doing in your home states and encouraging more young people to step up and take advantage of these programs, these CTE programs and the short-term training programs. Every community college in our states is now focused more and more on this. It’s the number one priority at the community colleges around America I’m told, to get this JOBS Act done, because they are all doing these short-term training programs, as are the technical schools and I think it’s the best way to begin to fill this jobs' gap that we see. Thank you, Mr. Chairman.”