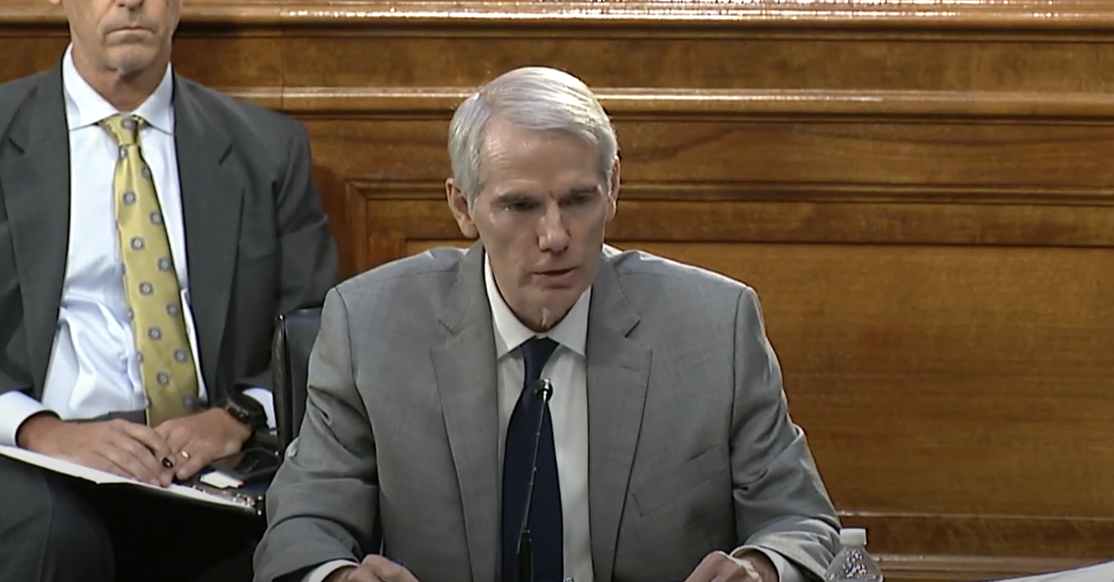 Senator Portman: “Thank you, Mr. Chairman. I appreciate the fact you’re having this critical hearing today. I must say I’m going to change what I was going to talk about based on the last interaction.

“Thank you for being here. I wish Secretary Austin were here because Secretary Austin could answer many of the questions that have just been posed. I have a lot of respect for my colleague, Senator Murphy, as he knows.

“This afternoon, I’ll be speaking on the floor about Max Soviak. He is a Navy Corpsman who is one of the 13 American soldiers, sailors, and Marines who were killed on the wall trying to help others escape from the tyranny of the Taliban. He should never have been put in that position. It was an impossible position for our troops, for your diplomats. And the impossibility that they faced was due to our policy decisions. There was an alternative. Bagram Air Base – I mean it was shut down in the middle of the night with no notice to anybody. It was a surprise.

“I’ve talked to people who know a lot more about the military side of this than I do who tell me that, yes, the Afghan troops were a disappointment, but that’s partly because they were used to having Americans provide that close air support. And if they had that, they could have pushed back against the Taliban. I think you will hear that from your military. I think if Secretary Austin were here we would hear this. But we just left, like, just pulled out all the military underpinnings. So without the cover, literally, of close air support and other military support, yeah, it became extremely dangerous and chaotic, and we left a lot of people behind.

“Senator Romney has asked you to give him some numbers and you said you’re still working on that. Here are the numbers that I have, the best that I have as the Ranking Member on the Homeland Security Committee, where we’ve pushed and pushed and pushed. 18,000 applicants for SIV. We got 705 out. You said earlier the overwhelming number of people who were at-risk got out. I don’t think that’s true.

“We think about 30,000 at-risk Afghans were evacuated out of an estimated 60,000. That’s the best numbers we can come up with because we can’t get good numbers from the administration. But that’s the best estimate. So that’s true that we left people behind who had stood with us and helped us. Obviously, American citizens were left behind. Green card holders were left behind. But thousands of people who stood with us and helped us. And then let’s ask about who came. Earlier, there was discussion about what kind of vetting has taken place. The best numbers we have is that about three-quarters of the people who were evacuated were not green card holders. Were not American citizens. Were not SIV applicants. Were not P1 or P2 visa holders.

“So about three-quarters of these individuals may not have qualified in this sense. Now, you say that they’re being vetted. Good, they should be. And, you know, nobody knows because we can’t get good information from the Department of Homeland Security, from the State Department, and others.

“But from the start many of us have said what we do there needs to be based on conditions on the ground. Quite frankly, the president’s decision was not based on conditions on the ground. That’s why it was a disastrous withdrawal. That’s why it put so many people at risk. It should have been an orderly withdrawal under the cover of superior U.S. and NATO military force. We did have 2,500 troops there, but we had 7,500 NATO troops with us, too. Again, many of their commanders were shocked at what happened, because they were surprised because there was not good coordination. There was a lack of coordination with the people who had stuck with us. I talked about Bagram.

“There was also a lack of integrated interagency planning. Of course, we’ve seen this in terms of how the chaotic withdrawal occurred. These were preventable problems, and they put our military and your diplomats in this impossible situation. They did the best they could, and I commend them for that. In an impossible situation, it’s amazing that they were able to perform, but it was so rushed and so chaotic that again, we didn’t get the right people out. And many who we did get out seem not to fall into any of the categories that we are concerned about.

“So now what do we do? Let’s look forward, as was suggested by Senator Coons, and I agree with that. You said that you don’t believe it will be a platform for terrorism going forward, that the current government, the Taliban government, has said that they will fight back against terrorists. Do you believe that the Haqqani network and particularly the new Secretary of the Interior, who is a wanted terrorist based on your administration’s assessment, do you believe that that is an indication that they are going to fight back against terrorists?”

The Honorable Antony Blinken, Secretary of State: “The question, Senator, from our perspective and our partners’ perspective, is whether the Taliban will make good on commitments to ensure that Afghanistan is not used as a place for outwardly directed terrorist attacks. And they’ve made commitments, but we’re not relying on those commitments. We’re going to make sure that we have in place the ability to detect any reemergence of that threat and to be able to do something about it if it does reemerge. Something that we can talk about in more detail in another setting.”

Senator Portman: “Is the Haqqani network considered a terrorist group?”

Secretary Blinken: “It is.”

Senator Portman: “Is it true that the Interior Minister is a leader of the Haqqani network?”

Secretary Blinken: “That is accurate.”

Senator Portman: “I just think, sadly, we have shaken the foundations of a lot of our alliances, and we have work to do. And I think we have demonstrated weakness and made the world more dangerous as a result.

“Let me ask you about one specific question. I guess my time has expired. I will follow up with regard to some of the international financing questions from the letter we sent to Secretary Yellen from Senator Rubio and myself regarding foreign assets. Thank you, Mr. Chairman.”