WASHINGTON, DC – This evening on the Senate floor, Senator Portman discussed the introduction of the historic bipartisan Infrastructure Investment & Jobs Act, the legislative text of which was filed today. Portman, who played a leading role in drafting this landmark investment in roads and bridges, rail, transit, ports, airports, the electric grid, broadband, and much more, commended his bipartisan colleagues with whom he worked to draft this legislation, as well as the members who actively supported it. Portman urged the Senate to vote to pass this legislation so that we can address our nation’s crumbling infrastructure. 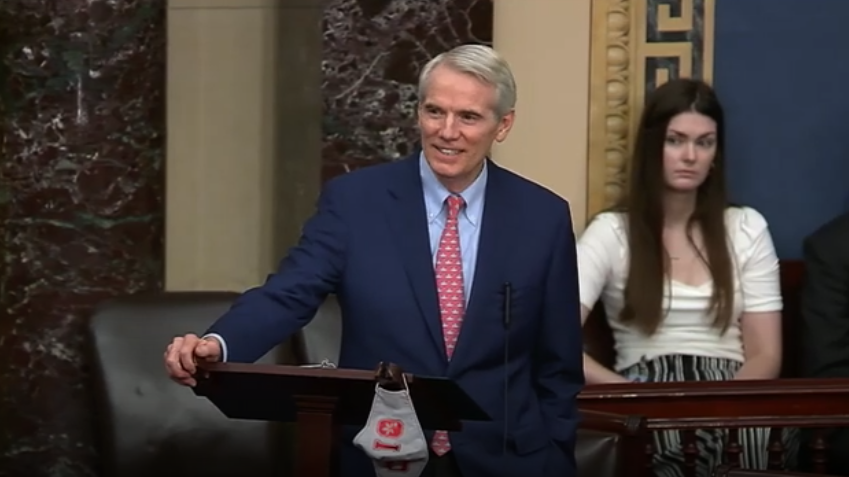 “Mr. President, I concur with the comments of my colleague from Arizona. She put it well. This is a really important bill because it takes our aging and outdated infrastructure in this country and modernizes it. And that’s good for everybody. It’s good for the truck driver who can leave home knowing he’s going to be safer on our roads and our bridges. It’s good for the mom who commutes to work and is sick of waiting in rush hour traffic on the way to work and on the way back because she’d rather spend more time with her kids. It’s good for the factory worker in Ohio who makes things that need to be transported. We make tanks in Ohio, we make cars in Ohio. We make washing machines. They go all over the world. Our ports – our land ports and our seaports – are inefficient and backed up. It’s good for our consumers who are waiting for products from all over the world because our ports are backed up.

“Our infrastructure is way behind. And we’ll talk a lot more about that over the next couple of days with some very specific data as to how we have fallen behind, how we’re not competitive anymore, how China has surpassed us in terms of infrastructure as a percent of their economy. They spend about four times more than we do. Why? Because they get it.

“This helps make the economy more efficient, more productive, and therefore it actually returns an investment to the American people. We’re also going to hear about how it’s not going to increase inflation like some of the other spending that is being talked about around here, partly because it’s long-term spending for capital assets, it’s spending that’s going to add to the supply side, meaning it’s actually going to be counter-inflationary and create more jobs.

“We’ll hear all about that. But one thing that I do want to make sure that we hear about tonight is the fact that this process of starting from the center out has worked. People have talked about infrastructure in this city forever. President Trump had a $1.5 trillion infrastructure package. Ours is $550 billion, by the way. Five percent of his was paid for. Ours is paid for.

“We kept to those two principles, and I’m so proud of that – that tonight we can say the amendment, the substitute amendment is going to be offered, and it’s going to keep to that commitment. $550 billion, no new taxes, core infrastructure only. And it’s great for the American people. I want to thank a few people who got us here, who are going to be able over the next few days to tell us in great detail the role they played because it was significant on every one of their parts.

“First, of course, Senator Sinema. She’s been the one who has kept us on track, and that’s been very important. But also to my colleagues who are here tonight on the floor: Senator Susan Collins, Senator Lisa Murkowski, Senator Mitt Romney, Senator Bill Cassidy. My Republican colleagues who we’ve worked with over the last four months, and each have made huge contributions to this. I want to thank the White House for their work with us, because they said early on, ‘OK, we want to do this, too, in a bipartisan way.’ We said, ‘OK, if you’re serious, we do, too.’ And sure enough, we negotiated. It was tough. We had a lot of differences. But we were able to get to this point tonight.

“And then a much bigger group. So to my colleagues who also helped in the 22 working groups we had putting this together and did such a great job – Richard Burr, Lindsey Graham, Mike Rounds, Thom Tillis, Jerry Moran, Chris Coons, Maggie Hassan, John Hickenlooper, Mark Kelly, Angus King, Jacky Rosen. 11 Democrats, 11 Republicans. And then to my friends who took us over the top the other night on the first vote we had on this. I appreciate them because they weren’t involved as much on the details, but they know this is the right thing for the country. And many of them did help to get us where we are. Kevin Cramer, Mike Crapo, Mitch McConnell, Roy Blunt, Chuck Grassley, John Hoeven, Jim Risch.

“Folks, we wouldn’t be here without every one of them. And we thank all of the folks who have put so much time and effort into this. And mostly, we’ve got to thank our staff because none of us would be here standing tonight doing this if we didn’t have staff who have been working their hearts out, staying here till midnight, ensuring that every single thing in this bill has been looked over carefully to make sure that we got it right.  And we’re getting it right tonight for the American people, for our economy, and for the future of our great country.

“Mr. President, I yield to my colleague from Virginia.”