During a press conference this evening, Senator Portman delivered remarks touting the historic bipartisan infrastructure agreement that secured Senate approval in a key procedural vote today. The agreement – which Portman has played a key role in crafting – represents the largest investment in core infrastructure in our nation’s history. It will modernize and upgrade roads, bridges, ports, and other key infrastructure assets across the country, without raising taxes. This historic investment will pave the way for decades of economic growth and prosperity while reducing the inflationary pressures the economy is currently feeling.

Portman’s remarks can be found below and a video can be accessed here. 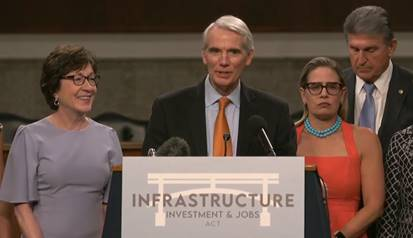 “Thank you all for joining us for another late evening. We will be going back to do further discussions on infrastructure tonight at our offices because we want to be sure we get the final text prepared and out. But tonight is also a time to pay tribute to my colleagues behind me who have put together something truly extraordinary, which is a $550 billion much-needed contribution to our nation’s infrastructure.

“And it happened from the center out. In other words, at a time when Washington seems broken, this group of members behind me came together – along with others – and decided we were going to do something great for our country. Every American believes that roads and bridges, ports, waterways, even our digital infrastructure needs to be updated. They know it because they travel on those roads, go to those bridges, deal with the challenges of not having Wi-Fi to be able to do your schoolwork or your work or get your health care. So people know that it’s needed. And Washington has known that for years.

“Every president in modern times has proposed a major infrastructure investment. In fact, Donald Trump proposed one over $1.5 trillion when he was president. This one is $550 billion. It’s paid for. We do it without raising taxes. We do it in a way that’s going to help in terms of our economy long-term, to make our economy more efficient, more productive. Therefore, it’s not adding to inflation. It actually is counter-inflationary. It will help deal with the very issue we’re now facing, which is higher inflation.

“It makes sense to the point that two different polls, each a couple of months apart over the last few months, have said that 87 percent of the American people support this effort. And again, it’s no wonder. When we go home, we all hear about it. And despite the popularity of it and the need for it, Washington hasn’t been able to get it done.

“This time we’re going to get it done. We took a first important step tonight. There are, of course, additional challenges ahead. We recognize that. But go let’s back to where I started – it would not be happening but for a team effort, everybody behind me. I want to thank Kyrsten Sinema in particular, who helped to co-lead these negotiations. But every single member here played a huge role. Susan Collins, in the last 24 hours, I think has slept maybe two hours.

“On our side, Mitt Romney and Bill Cassidy, Lisa Murkowski, all of them helped with the negotiation, but every member here helped. They were all involved in the working groups and helped to combine to produce something that’s, again, not about Republicans or Democrats, but about making America more productive, more efficient, and therefore improve the lives of the people we represent. With this I’d like to turn to Senator Sinema.”