This morning on Meet The Press, Senator Portman, co-chair of the Senate Ukraine Caucus, discussed the escalating crisis in Ukraine. Portman underscored the need to support Ukraine and made clear that Russia will face severe consequences if they invade their sovereign neighbor. He also touted a forthcoming bipartisan package that will provide additional military assistance to Ukraine and sanction Russia for their aggressive posture. Two weekends ago, Senator Portman traveled to Kyiv, Ukraine, to meet with Ukraine President Volodymyr Zelenskyy to discuss the ongoing threat. 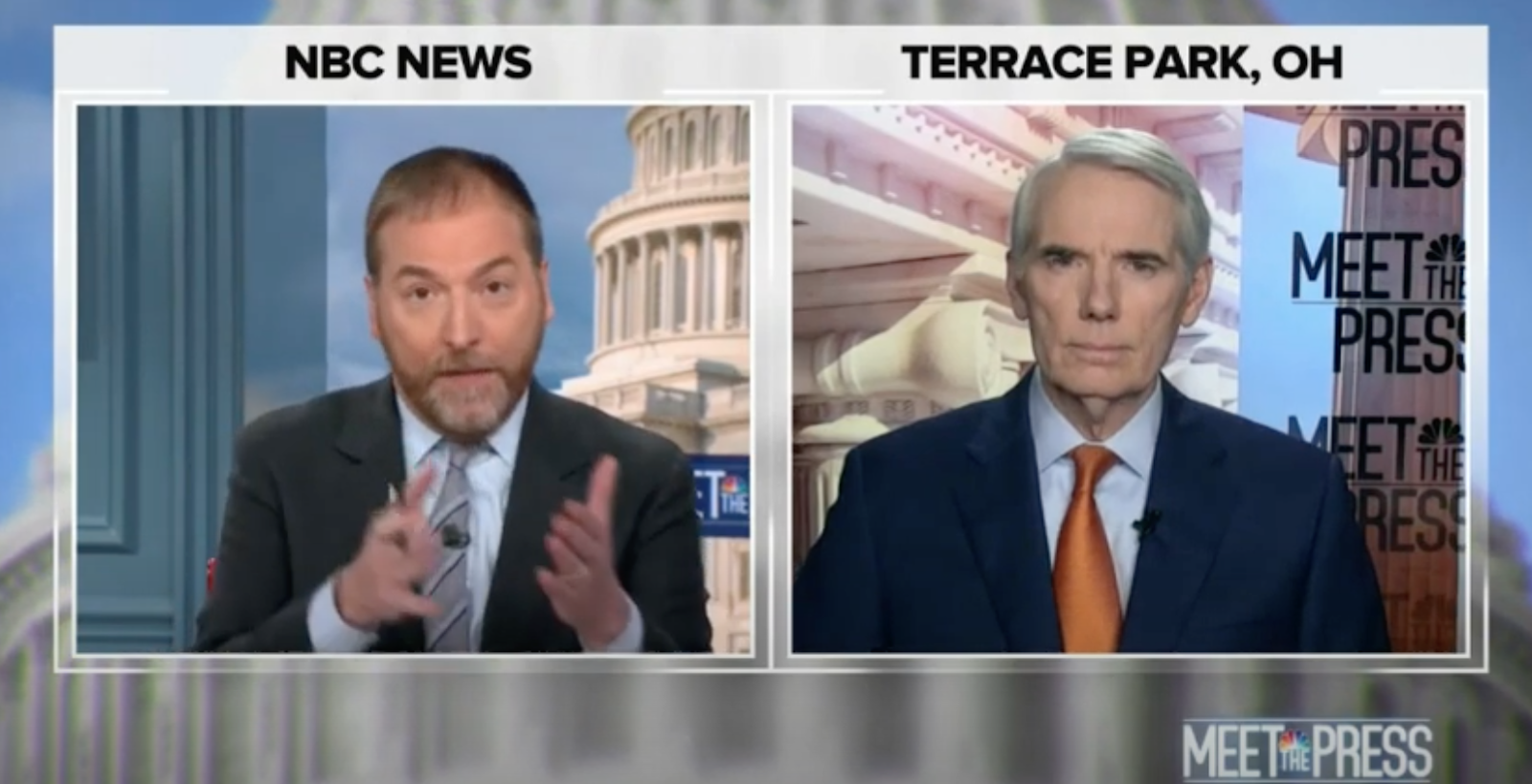 PORTMAN ON THE SITUATION IN UKRAINE:

“Well, look, it's up to NATO and up to Ukraine. NATO has an open-door policy, and we have to continue to defend that. So I don't think that's something that we're going to decide. I will say two things. One, Dick Durbin and I are co-chairs of this caucus, and we have been unified as Republicans and Democrats in standing up to what Russia has done, both what they did with regard to Crimea 7 or 8 years ago and the Donbass region. In other words, they've already invaded Ukraine twice. And certainly now, while Russia is massing this unwarranted and very intimidating force all along the borders, not just the Eastern border now, but the Northern border and elsewhere. So we are together.

“Second, we're looking at putting together a strong package, which I hope we can pass next week, which would include sanctions, which would include more military assistance, which would include helping them to fight back against the cyber attacks that the Russians continue to use against Ukraine. And also to help on the disinformation campaign that Russia is actively involved in to try to destabilize the Zelenskyy government. So this right now, Chuck, in Ukraine is where the cause of freedom is being waged in our generation, and we need to stand up and be unified with our allies and as Democrats and Republicans.”

“Well, look, he's got a slightly different constituency than President Biden. President Biden's job is to mobilize our allies, mobilize America to be prepared for the possibility that Vladimir Putin will make a huge mistake and put together consequences that will be devastating to try to avoid that from happening. President Zelenskyy obviously is trying to maintain his economic growth in his country, which by the way, is pretty strong right now and keep the country from panicking, while having them be prepared. But we're together. That's what's important. As to Russia and what Russia is doing, the Ukrainians and the Americans are absolutely together, but so are so many other allies, really the entire free world. It's been very impressive as I look at what Estonia, Latvia, Lithuania, the Baltics and Finland and Denmark and countries like Canada and the UK have done. Our alliance is incredibly strong.

“One thing Vladimir Putin has done successfully is he has strengthened the trans-Atlantic alliance, and it's countries around the world who are looking at this and saying, we cannot let this stand. We cannot let this happen. For the first time in nearly 80 years, since World War II, we could have a major conflict and a very bloody conflict in Europe unless we stand up together and push back. And so far so good. We're doing that. My hope is that Vladimir Putin will see that and realize that the consequences will be devastating for him.

“By the way, Chuck, the other thing that was interesting in being there is that the commitment and the patriotism of the Ukrainians. I've been at the line of contact. I was there in 2014 after this Revolution of Dignity. And Ukrainians feel a very strong sense of nationalism, and they're going to fight.”

PORTMAN ON THE NEED FOR GERMANY TO DO MORE TO SUPPORT UKRAINE:

“Well, apparently they're saying that privately. They should say it publicly. I'm also, as you know, a little disappointed in their inability to approve arms sales. If something was made in Germany, in this case in East Germany they made howitzers that are now with the Estonians. The Estonians want to provide it to Ukraine. Ukraine wants these howitzers, which are older equipment but important for them, and these are artillery weapons that the Ukrainians need badly. And yet Germany is not approving it. That makes no sense to me. And I've made that very clear in conversations with the Germans and others. So my hope is that Germany will step forward even more. But they're with us. They're saying that they would cut off Nord Stream 2 pipeline should there be an invasion of any type. And I certainly hope that's true.”

PORTMAN ON WHAT IS AT STAKE IN UKRAINE:

“Well, I wouldn't call it a movement. But I think we've got to be sure we're understanding what's going on here. The Ukrainians are not asking for American troops to come to Ukraine. I've gotten a number of phone calls from some of these cable news shows saying we got to keep our troops out of there. They're not asking for our troops, nor is anybody talking about that. We are talking about strengthening the countries around the region who are looking for more help, NATO countries like the Baltics, like Poland.

“Second, again, this is about the fight for freedom. This is a country that has decided that they want to be like us. They want to be a democracy. They want to respect the rule of law. They want to have a free enterprise system that's strong and vibrant. This has all happened in the last eight years and they have turned to the EU and turned to the United States and said, we want to be part of the West. And by the way, every year, Chuck, it's becoming more and more evident that that's where the people of Ukraine are, which is, I think, one reason why Vladimir Putin is moving now, because he sees it falling away toward the west.

“America always stands for freedom. We are the country that believes that people's free will ought to be respected, that sovereignty matters, that the dignity of the Ukrainian people matters, and this is what they want. So their territorial integrity is at risk right now and it's appropriate that the free world stand by them.”