Senator Portman, co-chair of the Senate Ukraine Caucus, made a joint appearance with Senator Jeanne Shaheen (D-NH) on MSNBC’s Morning Joe this morning to discuss the escalating crisis in Ukraine, as Russia continues its escalation on the Ukraine border. During the interview, Portman underscored the need to support Ukraine and made clear that Russia will face severe consequences if they invade their sovereign neighbor. Over the weekend, Senators Portman and Shaheen led a bipartisan congressional delegation of Senators to Kyiv, Ukraine, to meet with Ukraine President Volodymyr Zelenskyy to discuss the ongoing threat.

Senator Portman also criticized Germany for not doing more to support Ukraine and push back against Russia’s aggressive posture. Germany will not conclusively say that they will not certify the NordStream 2 pipeline if Russia invades Ukraine. He also noted that Germany is not authorizing NATO weapons transfers nor allowing flights carrying military aid for Ukraine to fly over German airspace. 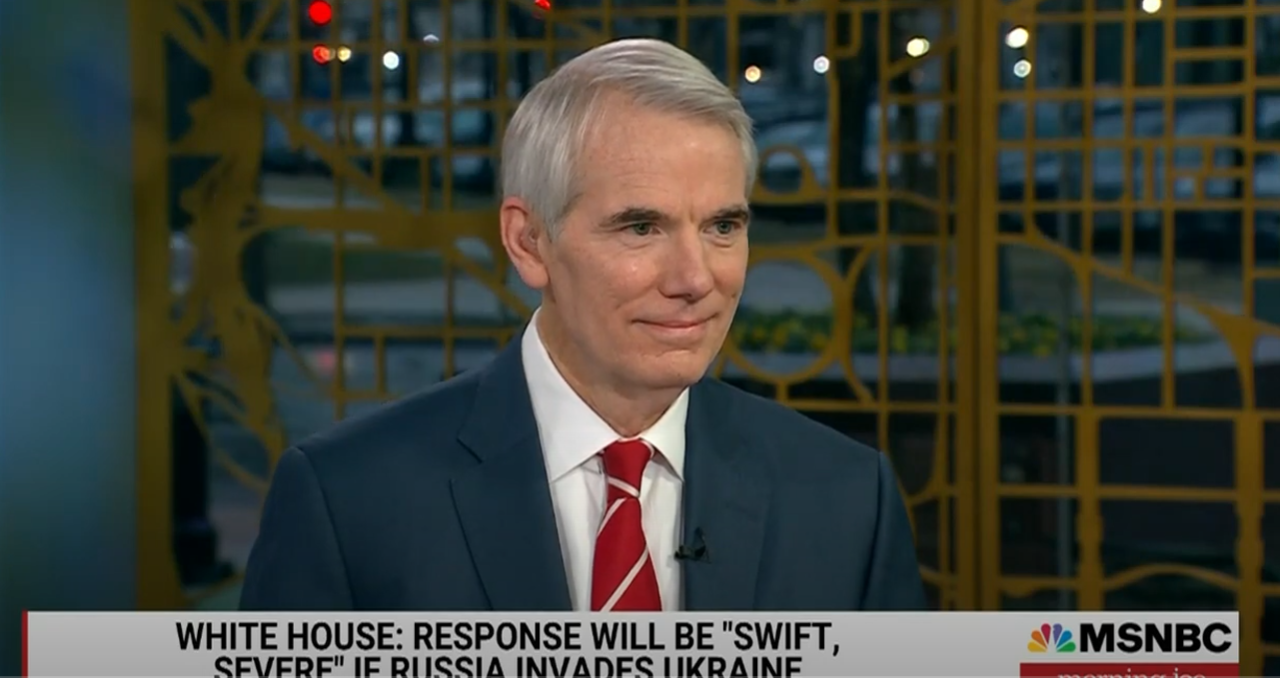 “I think it's confusing not just to Vladimir Putin, but also to our allies, including Ukraine. You heard their comments. So look, it was unfortunate. It was also unhelpful, but I thought the cleanup was pretty strong. He also made some other statements, including predicting that there will be an attack. Nobody knows that.

“I think probably trying to prepare the American people for that possibility. But that's not what we're about right now. We're about deterrence. We're about sending clear messages about how unified we are, how there will be devastating consequences should Vladimir Putin, Russia, decide to make this terrible mistake?”

PORTMAN ON CONSEQUENCES RUSSIA WILL FACE IF IT INVADES UKRAINE:

“Three things. Number one, devastating sanctions. The President has called them unprecedented. He has not specified them. But the thought is there would be financial sanctions that we have not previously used and that this would be not just terrible for the Russian economy, but also for Vladimir Putin and his associates. Second is that the military in Ukraine is very different than it was in 2014, thanks in part to NATO training, thanks in part to the military weapons that are already there. And third, should there be an invasion that we, the United States, and other allies, including I hope NATO, will fortify Eastern Europe in ways we've never done before. And the President has been clear about that, that there will be additional troops and military assets sent to the region. So not just Ukraine having the ability to defend itself. It will be a bloody conflict. It will be difficult. And as you know, Russia is concerned about body bags going back east, and they were even concerned about it with regard to Crimea, which was a time in 2014 when the Ukrainians were not ready and we were not ready.”

“Willie, first, when we talk about unprecedented sanctions, it would be something new. So I kind of agree with you that the Russian economy has become somewhat sanction-proof because they've been able to move assets at places including, by the way, dollar denominated assets to the United States, which might now be something that we can go after. So we need to be tougher about it. You've heard discussion of the so-called SWIFT sanctions, which has to do with electronic transfers on the financial services side. So there are some things we could do we've never done before. But having our allies with us is critical because unilateral sanctions are not as effective. So that's one. But second, look, we need to have unity among our allies, and that includes, again, providing additional military assistance so Ukraine can defend itself. That should be happening, in my view, much more quickly than it is.”

PORTMAN ON HIS CONCERN WITH GERMANY’S RECENT ACTIONS:

“Let's talk about Germany, Joe, because it's a great question, and I'm very disappointed, frankly. Three things we need from them right now. One is the ability for other NATO countries to transfer arms to Ukraine. They are actually blocking transfer of arms that other NATO members would like to send. Because under NATO agreements and the NATO procurement system, they are permitted to do that.

“I would ask you to ask them, but I suppose they think that it's provocative. But 100,000 troops being amassed on your border and more equipment and troops coming every day is pretty darn provocative. So, I mean, I'm not sure how they'd be further provoked if they're provoked by a peaceful nation like Ukraine just saying, please respect our territorial integrity. Second, there is discussion about whether they're allowing over flights, as you know, the British cargo that we saw on the tarmac, a C-17 with anti tank weapons, apparently they had to go around German airspace, which was reported, including on your network, because Germany wouldn't permit it. Now, there's some that said it doesn't prove. But if you go online, you can see where the transponder on the plane was and where they went and they went around Germany. That's outrageous.

“And then third, of course, is with regard to the NordStream 2 pipeline, which is an issue where Republicans and Democrats have tended to differ. But I think everyone should agree that should there be an incursion, an invasion, any kind of activity, that the pipeline needs to be cut off, that has to be said. And Germany has not said that would happen?”

PORTMAN ON WHAT IS AT STAKE IN THE UKRAINIAN CRISIS:

“Can I just mention something in response to what Katty said? I think this is global. I think this is not just about the stability of Europe, which obviously it is. And if you talk to countries like the Baltic, Poland and others, of course they're scared to death by this, but this is about the fight for freedom, really. And it's about us saying as Americans and as our allies around the world, not just NATO allies, but the free world in general, that we're not going to permit this sort of thing. Otherwise, what happens with regard to places like Taiwan? What happens with regard to places in, let's say, Latin America, even where we have countries now that are threatening other countries that are democracies? Let's say that we do allow this to happen. What does it say both to those countries that would feel threatened and those aggressors? I think this is a bigger issue, although I agree entirely with what Senator Shaheen said about the fact that this does affect Europe in a substantial way.”

PORTMAN ON COUNTER-INFLATIONARY IMPACT OF THE BIPARTISAN INFRASTRUCTURE BILL:

“I was talking about the infrastructure bill. Yeah. And I strongly believe that because the economic analysis shows that these are long-term capital investments that will come back to make the economy more efficient, therefore more productive, therefore counter inflationary.”

“Well, it's all about stimulus. What happens if you put more stimulus in the economy at a time when we already have supply issues, you're going to cause more inflation. I mean, this is what Larry summer said early on and others, Democrat and Republican, and that's clearly what happened to $1.9 trillion was mostly stimulus. A lot of BBB is stimulus. So we need to back off on the stimulus and get our supply chain in order, which was in part due to COVID, not anything that the administration did right, but they did push the stimulus side, which created this incredible inflation we have right now that's affecting everybody.”