In an interview this afternoon with Fox News’ Neil Cavuto, Senator Rob Portman discussed the United States’ recent chaotic withdrawal from Afghanistan, which led to a weakened standing for the U.S. on the world stage.

He also discussed Secretary Blinken’s testimony before the Senate Foreign Relations Committee today, of which Senator Portman is a member. Portman pushed back on the secretary and Democrats’ narrative that the only choice in Afghanistan was to expand our military presence in the country or have a chaotic exit. Portman said Democrats continue to use a false choice as it was entirely possible to have left troops on the ground in Afghanistan in order to have an organized transition and not leave citizens and allies behind. 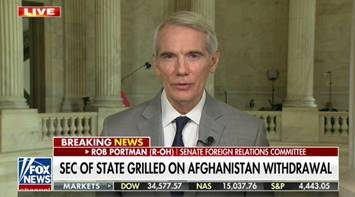 PORTMAN ON THE WITHDRAWAL FROM AFGHANISTAN

“It’s about competence, isn’t it? And it’s about commitment to our allies. This was a disastrous withdrawal. There’s no other way to put it. The evacuation was rushed, it was chaotic. It resulted in us not only not getting Americans out entirely and a lot of green card holders and a lot of what they call SIV’s, Afghans who helped us in the effort. But also it resulted in us bringing people to America who weren’t properly vetted because it was so chaotic. So there’s a lot of reasons why this is an example where the United States has lost prestige around the world. Our adversaries are emboldened, terrorists are emboldened, and our allies are wondering about our commitment.”

“In my questioning, I focused on [the evacuation plan], because both the Democratic questioners and the secretary were using a false choice. They were saying either it was going to be a great expansion of the military effort and a war that the Taliban would engage us on, maybe another 20 years; one choice. Choice two was this kind of a rushed and chaotic and precipitous withdrawal with the evacuation being such a disappointment.

“That’s not the choice. The choice was to keep Bagram Air base open, keep our air power there, to provide close air support for a period of time while we did an orderly transition. That is obviously the way it should have gone. I don’t think that there’s anybody who looks at it now that doesn’t agree with that. They set up a false choice. I think the American people are too smart for that. They know this didn’t have to be this way. American power is unrivaled in the world still. We have the ability to tell the Taliban, ‘We’re going to take our time and do this right and if you attack us or attack American citizens, there will be severe consequences.’ That’s what we should have done.

“From talking to military planners that know more about this than I do, there’s a way to do it by keeping Bagram open, by keeping our forces there to be able to respond, particularly air support and do this in an orderly way that would have permitted us to leave with a lot more dignity and respect around the world.”