Senator Portman joined FOX Business’ Kudlow this afternoon to outline his concerns with the Democrats’ $3.5 trillion reconciliation proposal and discuss the bipartisan infrastructure agreement he is helping lead. Portman explained why the bipartisan agreement will not worsen inflation, but rather will lower costs for businesses, spur economic growth, boost productivity, and ultimately lead to a more efficient and prosperous economy.

In addition, Portman touted a recent Congressional Budget Office (CBO) analysis indicating that – thanks to the Tax Cuts and Jobs Act – the federal government will bring in significantly more money than previously estimated for 2022. The 2017 tax overhaul – which Portman played a key role in authoring – had a profound and immediate impact on the U.S. economy, leading to higher wages, historically low unemployment, and stronger economic growth. Portman made the case that raising taxes on families and job creators – as Democrats will have to do to fund their $3.5 trillion reconciliation proposal – will reverse the progress and undermine the prosperity brought about by the Tax Cuts and Jobs Act. 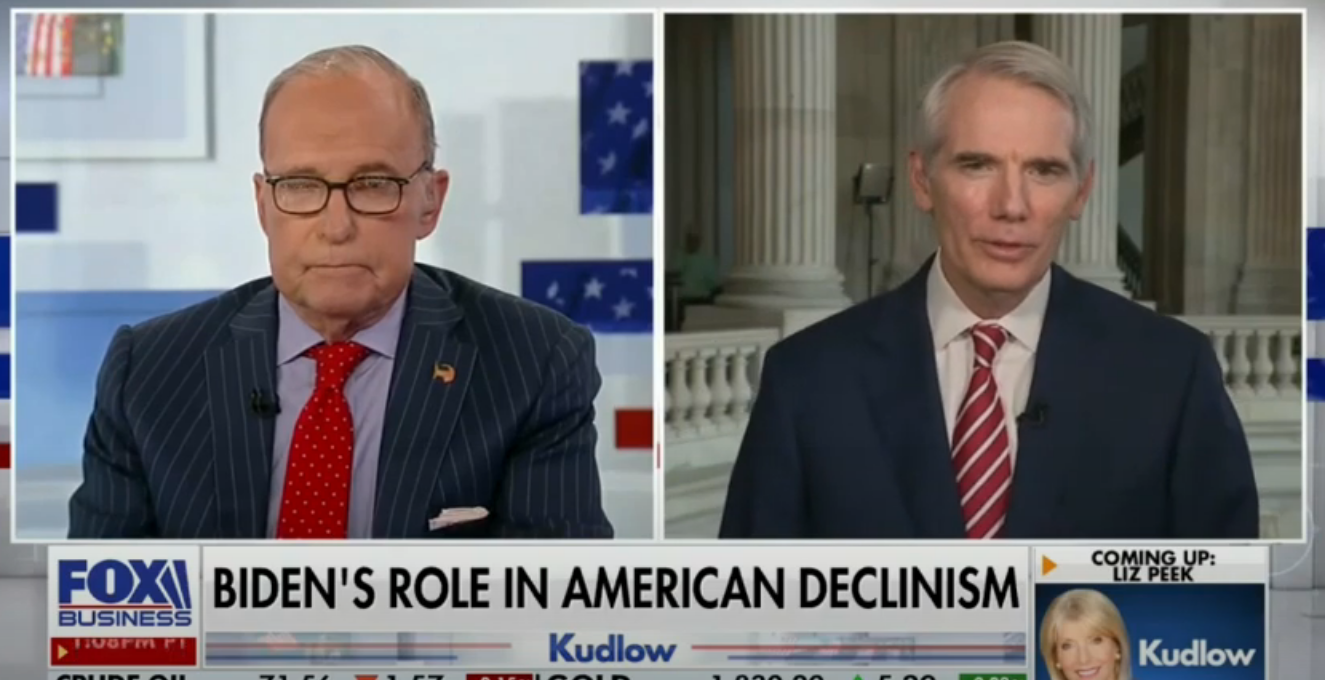 “Well, Larry, first of all, you’ve proven again this afternoon that you don’t just play an economist on TV, you actually understand the economy and what the impacts are going to be. And let’s face it, I heard you on Martha McCallum earlier on Fox, where you said, ‘If it ain’t broke, don’t fix it.’ We went into this pandemic with an incredibly strong economy. And it was an opportunity economy. So you talked earlier about the notion in America is that you have opportunity at the starting line, and that’s exactly what we were providing. So you not only had economic growth that was strong. You had wage increases of over three percent for 19 straight months as of February of 2020. And those wage increases were mostly going to middle-income and lower-income workers. I mean, it was amazing. And you had the lowest poverty rate in the history of the country since it started to be calculated back in the late 1950s. And you had low unemployment. Historically low for certain groups – Blacks, Hispanics – but low unemployment overall, 50-year low.

“So this was the opportunity economy we all hoped for. And the tax relief, the tax cuts, the regulatory reform, the international trade side, everything was working to try to get us to a point where we could not just have a strong economy, we were lifting people up and bringing them in from the sidelines into our economy.

“I just got a report from CBO. You probably saw it about a week ago saying that, guess what? The income is actually, for the federal government, the revenues are going to be higher over the next year and two years than projected. In fact, 10 percent higher. That’s a significant growth, as you know from your time at the Office of Management Budget. Why? Because it’s working, the tax reform is still working, as are the other aspects of the economic plan that you helped engineer. So this is not the time to do this massive tax increase.”

PORTMAN ON WHY BIPARTISAN INFRASTRUCTURE AGREEMENT WON’T LEAD TO INFLATION:

“I agree with you about the spending side. I think it puts us in a position where it’s harder to have that entrepreneurial spirit in the sense that you have opportunity at the starting line as we said. But it’s the taxes that concern me just as much, because this would be the highest tax increase in the history of our country in order to pay for the $3.5 trillion at a time when we are coming out of this global pandemic with a strong demand. The demand side is fine. It’s the supply side that’s hurting.

“I will distinguish, if I could, Larry, and you and I talked about this, the infrastructure package from the so-called reconciliation, $3.5 trillion. Infrastructure spending is not going to be spent this year. It’s not going to be spent next year. It’s long-term spending for capital assets. It’s a little like CapEx if you’re in business, which typically you would borrow for. And this will actually help make the economy more efficient and more productive.

“Therefore, according to the CBO, according to two economists who wrote about it today, who I know you respect, Douglas Holtz-Eakin and then Michael Strain over at AEI, this is actually going to add more on the supply side and actually put more revenue back into the economy over time. It should be paid for, in my view, without tax increases. But it’s a different kind of spending. I just wanted to distinguish those two. But in terms of the $3.5 trillion, this is social spending that’s going to start right away and will have a negative impact on the economy because it will add more demand on the demand side, you know, putting more money out there in order to stimulate the economy that does not need stimulation right now. We need more on the supply side, which is the building and the jobs and so on that will come from the infrastructure package.”

“You know, you can’t just raise the taxes the Democrats want to raise. And you’ll see this start to play out as this $3.5 trillion bill becomes more of a reality as they look at getting the votes for it. You’ll start to see that it is chock full of taxes, including taxes on those working families in Ohio and around the country.

“It’s a real problem. And health care costs are already too high. There’s nothing in there, as far as I’m told, that would reduce the costs of health care. Instead, it expands health care and particularly moves us toward a single-payer-type program, which, of course, is what Bernie Sanders, my colleague from Vermont, has fought for for years. And he’s the chair of the Budget Committee, so I understand he’s very pleased with the expansion of Medicaid and Medicare, and moving toward a system where the government sets the prices. And that’s not going to make our health care system better. More transparency would and more competition and therefore pressure on getting prices down – that would help the economy and help families in Ohio be able to afford health care.”

“Yeah, I think it’s a great point, Larry. And let’s look at what’s happened over the past couple of decades. America’s emissions are actually down. We’ve reduced our CO2 emissions, not by a mandate from the federal government, but by more efficient energy use and specifically natural gas, which has been a great boon to our economy, but also reduced emissions. At the same time, as an example, China’s emissions over the past three decades have tripled to the point that China now has almost three times the CO2 emissions that the United States of America does.

“So you recall not long ago the U.S. was leading in CO2 emissions, according to all the studies. Now we’re actually making progress, not by joining any accords, not by the mandates, but by allowing the market to work. So one thing I do worry about – I haven’t seen the details yet because they haven’t put them out – but I wouldn’t be surprised if everything you listed is there and perhaps more. But it’s this general notion that the government ought to be stepping in and providing these mandates rather than providing incentives which have worked.

“And I’m concerned, as we all are, to have a clean environment and clean air, and we want to see the emissions be reduced. But let’s do it through market forces that don’t hurt the people I represent, because you’re going to see people’s electricity costs, their utility bills go up dramatically. You’re going to see industries, including in places like Ohio, where we do have heavy industry still and we do still rely on fossil fuels, be at a disadvantage.

“So, let’s use the technology that we have developed, new technologies, and use the market and we can make progress. We’ve shown that over the past couple of decades in this country.”