Senator Portman joined FOX Business’ Varney & Co this morning to discuss his concerns with the Democrats’ $3.5 trillion spending bill, which will hurt the economy, job creation, and working families who are already paying higher prices at the pump and in grocery stores because of surging inflation. Portman also touted the bipartisan Infrastructure Investment & Jobs Act and called on his colleagues in the House of Representatives to follow the Senate’s lead by passing this historic piece of legislation.

Portman also discussed his amendment with Senator Tom Cotton (R-AR) to the continuing resolution to fund the federal government through December 3 which would require that Afghan evacuees follow normal vetting procedures prior to receiving REAL ID driver’s licenses.

The REAL ID program was one of the top recommendations of the 9/11 Commission to enhance security on commercial airlines & in federal facilities. This amendment would protect national security by requiring that Afghan parolees not be exempted from the federal REAL ID requirements.

The amendment also places a responsible eighteen-month time limit on housing, food, and medical benefits for Afghan parolees. Under current law, Afghans who helped our forces in Afghanistan only receive those same benefits for a maximum of eight months. Finally, the amendment mandates that the Department of Homeland Security conduct interviews of Afghan asylum applicants quickly. 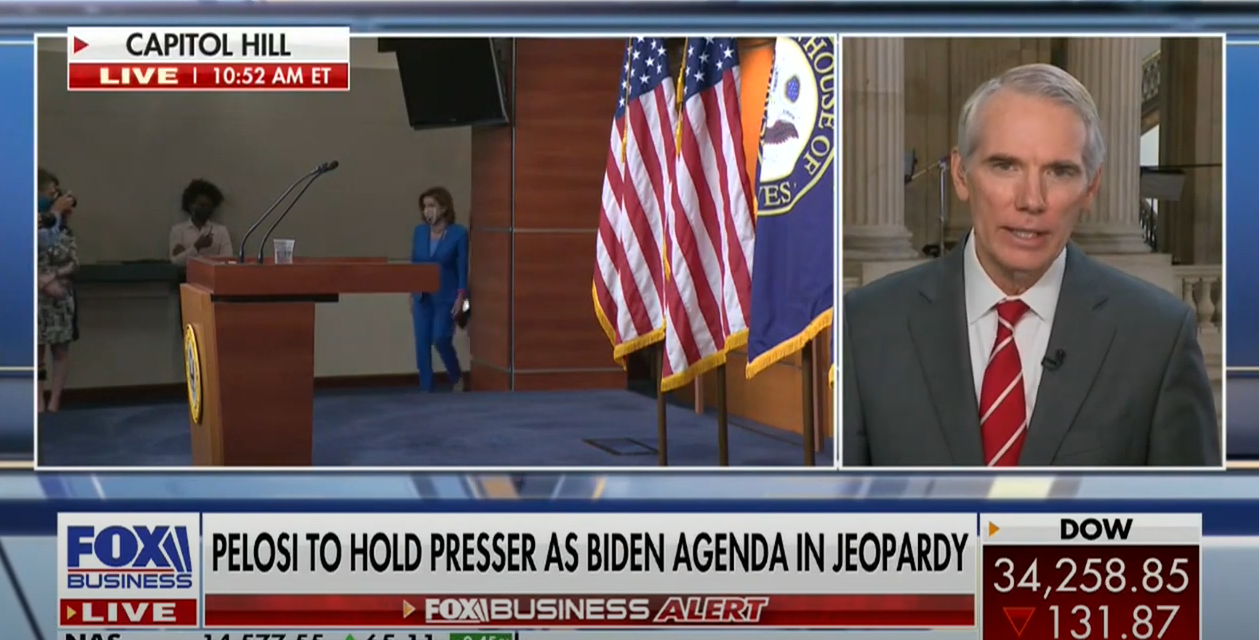 “Absolutely. And they are two very different products and that’s why it’s so important that we separate them. And what Speaker Pelosi has wanted to do all along, as you know, is bring the two of them together. The infrastructure bill has no taxes in it, no tax increases. It came out of a process that was truly bipartisan. Recall, President Biden had proposed a $2.65 trillion so-called infrastructure bill. It had a lot of non-infrastructure items in it. It had huge tax increases in it. We took out just the core infrastructure, got rid of the taxes, and that’s what’s left. It’s about $550 billion in additional spending. The other spending would have occurred anyway, under our Highway Trust Fund or highway bill. So it’s about $550 billion. It’s the right thing for the country because it’s long-term spending, capital expenditures. Think of it as something that is part of the supply side rather than the demand side of the economy. It will be spent over many years, not just over the next couple of years, but over 5, 10, 15, 20 years. So I think that’s a good idea.

“The other one is a disaster and that’s the tax and spending extravaganza. It is reckless. It is exactly the wrong thing to do right now in our economy. It will increase inflation and it’ll hurt the economy by raising taxes on pretty much everybody and everything.

“Yes. I think it’s true. The progressives don’t like [the bipartisan infrastructure bill] because it doesn’t have the tax increases, doesn’t have the Green New Deal, doesn’t have all of the new free items for everybody that’s in the so-called reconciliation bill, which, by the way, is not just $3.5 trillion. I think it’s closer, Stuart, to $5 trillion when you really add it up. So I’m very concerned that what she may do today is not work hard enough to get the infrastructure bill passed because she really would prefer this tax and spending bill. And that would be a big mistake for our country.

“Let’s pass the infrastructure bill. It’s good for the country. It has bipartisan support. And we can continue the debate on the other issue. I’m strongly against it. So are, by the way, some moderates, as you know, on the Democratic side who have spoken up recently. I’ll let them speak for themselves, but they should be separate items. And she’s trying to confuse the two and bring the two together.”

PORTMAN ON THE CONTINUING RESOLUTION:

“Yes. I hope so. I do have a big concern about what the Democrats would like to do on the so-called continuing resolution to keep the government open. Because these evacuees from Afghanistan are not being properly vetted under their bill. We need to vet them like we would vet any other group of refugees or so-called parolees. We don’t know who a number of them are. And so one thing the Democrat version does is provides funding without proper vetting. So I’m offering an amendment with Tom Cotton and a couple of others to say, ‘Okay, we’re alright bringing folks in who helped us in Afghanistan, but they have to be properly vetted if we don’t know who they are,’ and I think that is a very simple amendment, I hope it passes.”