Senator Portman joined FOX Business’ Kudlow this afternoon to discuss the debt limit and outline his concerns with the Democrats’ $3.5 trillion spending bill. Portman explained how it would hurt the economy, job creation, and working families who are already paying higher prices at the pump and in grocery stores because of surging inflation.

With regards to the debt limit, Portman noted that Democrats passed a $1.9 trillion spending bill and are gearing up to force through a $3.5 trillion bill – the largest in American history – without a single Republican vote. As such, it is unreasonable to expect Republicans to step forward and raise the debt limit – which would effectively enable Democrats to continue pushing their partisan spending bills. 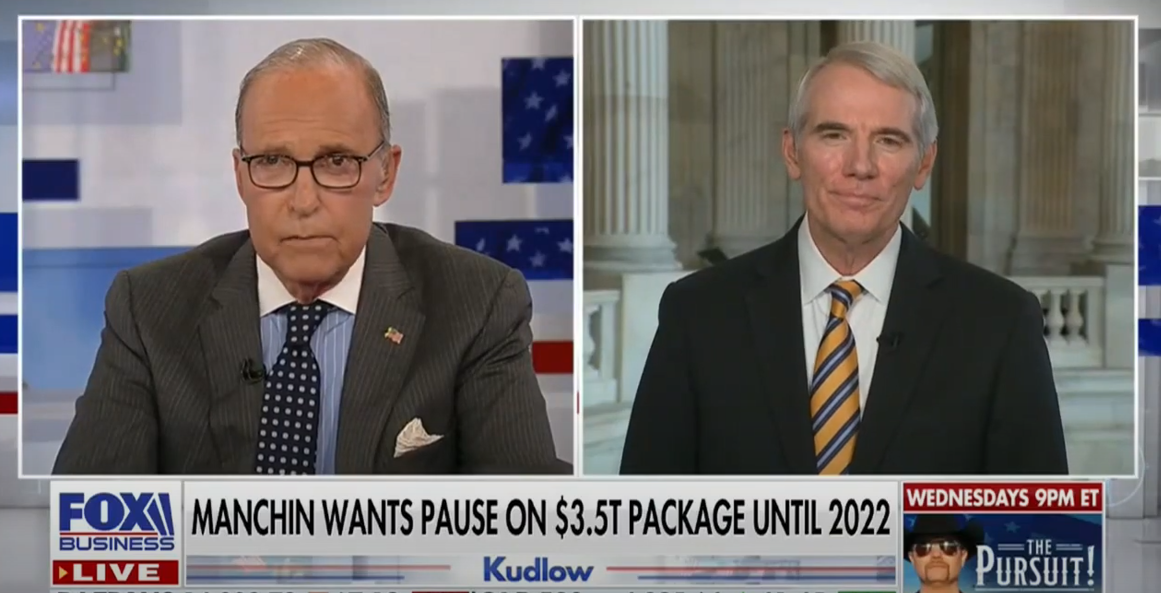 PORTMAN ON DEMOCRATS’ OUT-OF-CONTROL SPENDING AND THE DEBT LIMIT

“Well, the Democrats are going to offer a continuing resolution to keep the government from shutting down on September 30th, and they're going to add to that this debt limit. Now, as you have said, the spending this year has been astronomical already. Remember, $1.9 trillion in March, much of which had nothing to do with COVID. Now there's a proposal for another $3.5 trillion, which some would say is more than that over the 10-year period to be realistic.

“The point is that's why the debt limit needs to go up. That's substantially the reason why. So our approach is very simple. One, if you guys need to raise the debt limit because of all you're spending that you don't have a single Republican supporting and you haven't asked for our input on, go for it. You're allowed to do that. You can do that under what's called reconciliation. You can do it without a single Republican vote. But we're not going to be party to it because we're not part of the tax increases.

“I will also say that we believe as Republicans, that when you raise the debt limit, you ought to have some spending reforms as part of it. You mentioned $28 trillion. We're approaching a $30 trillion debt now. So if the debt limit has to be raised, which it will have to be at some point, we acknowledge that, you know that Larry, it should be accompanied by something that reduces the spending, gets spending under control. And by the way, that's the only way we've been able to do that over the years, going all the way back to Gramm-Rudman, which you will remember, but also more recently, the sequester and caps on spending. So I think that's the much better way to do it.

“Finally, I will say to your investors out there and to those concerned about what would happen if you went over the debt limit. We are not at that point. In other words, September 30th doesn't coincide with the end of the debt limit, as it currently stands. It will be sometime in October we're being told, probably the end of October. That's from the Secretary of the Treasury. So there is not also a great rush on this, which gives us time to try to get some of these reforms in place, as compared to simply raising the debt limit again with getting nothing that would help to deal with the fiscal crisis we're facing.”

“Well, you're beginning to see what happened, I think, back in the 90s, which you see more and more Democrats taking an opposite position to Israel. I will say that with regard to the Republican alternative, we will offer a continuing resolution to keep the government from shutting down. It's the same spending from last year. We realized that is something we should do. We will also offer the funding for the Iron Dome as part of our continuing resolution. We will also offer the funding that's needed right now for the disaster relief, particularly the hurricanes that have hit the South and Southeast part of our country. So that will be our alternative.

“What won't be in the alternative will be the debt limit increase. It's not timely. It's not the right thing to do in this context, and it's something the Democrats have brought on, so they should be the ones to raise it. But we will deal with the Iron Dome because you're right, it's really important we do that. And by the way, this is U.S. technology and Israeli technology working together to create the possibility to be able to protect Israel from attacks from missiles, particularly from Gaza Strip.”

“Well a delay is a whole lot better than passing it because it would be terrible for our economy. And you're right. There is an issue here as to the very culture of America, our work ethic. It's also about the American people, because remember, you and I talked about this a lot. The increases they're talking about in taxes do fall on American families. And by the way, a lot of families making less than $400,000 a year. Since we talked last time Larry, new information from the Joint Committee on Taxation which says that 66 percent of the tax increase on corporations, as they call it, is going to fall on those in the lower and middle income category. That's up to $500,000.

“That's about 169 million Americans, the vast majority of whom will be in that under $400,000 category. So, so much for the pledge that we're not going to affect anybody making less than $400,000 a year. So this is really bad for the economy. The social spending, the work disincentive part is there, but also the tax part is really going to hurt working families. It's really a bad bill for our country right now.

“We also have a real job issue in our country right now. We have about eight million people who are unemployed. And yet we have about 11 million jobs open. So how do we deal with that issue? Certainly it isn't by taxing people more. It's just the opposite. It's encouraging people to go back to work. It's not the spending programs they are talking about, part of which are disincentive to work. And it's encouraging us to do the things to have the long term economic growth that you and I have talked about a lot. So I agree it's really bad policy.”

PORTMAN ON THE BORDER CRISIS

“Well, we have the ability to finish the wall. It's authorized to be finished. The Biden administration stopped it. So the money is there. By the way, the money is being spent anyway. Literally, contractors are being paid for not doing the work to finish the wall, including, by the way, the technology along the wall, which most Democrats used to say they were for. Also, the infrastructure bill does have money for the border, as you know. It's got money for the ports of entry, which is one of our big problems right now, particularly with regard to fentanyl and other dangerous drugs coming across.

“We need more money invested in the border ports of entry and that's in the infrastructure bill. But on the wall, Congress authorized it. We have a lawsuit pending. And there's lots of activity on that trying to figure out how do you close those gaps? I've been down there. I've seen it. Literally you have the concrete and you have the steel ready to go. The steel, literally, right along the wall. Very bad for the morale of the border patrol. And yet you have these gaps periodically. So let's close the gaps. Let's come up with a sensible immigration policy so there's not this big pull factor to bring people over. And let's help our ports of entry, which is in the infrastructure bill.”