In an interview this morning on CNBC’s Squawk Box, Senator Rob Portman touted the bipartisan Infrastructure Investment & Jobs Act – landmark legislation he helped craft to upgrade and modernize America’s aging infrastructure. The Senate will vote on final passage of the legislation tomorrow morning.

Portman also discussed the ongoing efforts to provide greater clarity and certainty for the cryptocurrency industry. Portman explained how there is a consensus in Washington and across the country that better and more consistent information reporting on cryptocurrency transactions is a key part of allowing this technology to continue to grow in a healthy and sustainable way. To do that, this legislation requires cryptobrokers responsible for regularly providing any service effectuating transfers of digital assets like cryptocurrency, which for tax purposes means a sale on behalf of someone else, to issue a Form 1099-B to their customers in line with traditional assets like stocks and bonds. 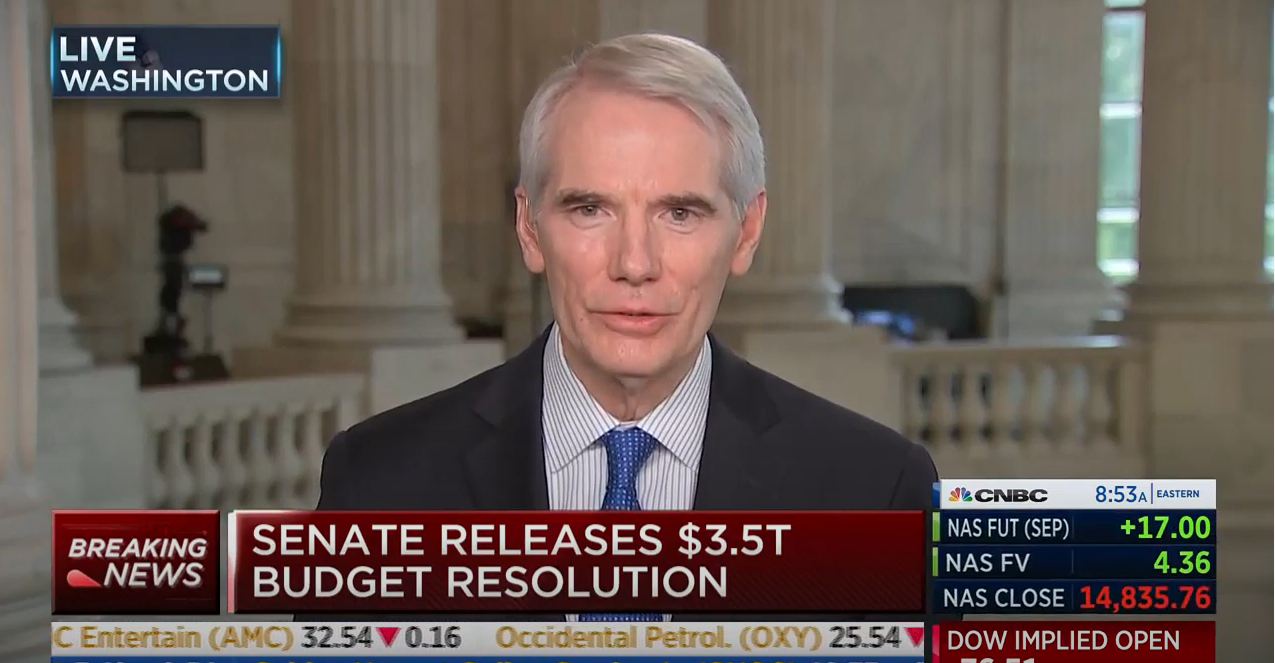 “It’s right around the corner…We’ve got a 4:00 a.m. deadline tomorrow when the debate will be over and then we’ll probably vote at about nine or 10. And based on the test votes in the last four or five days, it appears as though we’ll have about 18 or 20 Republicans joining most every Democrat to pass it, and so it’ll be a big bipartisan victory and we’ll be able to move forward with something that has only been talked about here in Washington for decades, which is how to give our infrastructure some needed improvements at a time when America’s infrastructure is falling behind the rest of the world and where we’ve got a lot of issues. So it’s an exciting thing for the country.”

“Well, in the legislation, we do something that there’s a consensus about, even all of them, all the folks that you just talked about, which is that we need to have proper information reporting for cryptocurrency, just as you would for an investment in stocks or bonds or other financial instruments. So a broker for cryptocurrency should provide individuals a 1099 to be able to know what their basis is and in many cases, to know what their gross proceeds are.

“This is great for everyday cryptocurrency holders because right now, as you know, you’ve got to figure out your own basis often because although some brokers provide it, some don’t. So it’s just standardizing the process. And again, I think there’s a consensus about that across all party lines and certainly in the cryptocurrency community. The question is, how do you ensure you do that without bringing other people into that reporting requirement in addition to brokers? And I think that’s a very serious issue and we must address it.

“Treasury and the Joint Committee on Taxation, which is a nonpartisan group up here, believe that the legislation, as it’s written, handles that properly. I think a clarification is needed and that’s why we’ve worked on amendments and worked on colloquies and worked on ways to address that, to be sure, we’re not bringing in, say, miners or stakers, or folks involved in software or hardware for digital wallets. And so that’s their concern. I share that concern and I think we can ensure that that happens through a number of ways.

“One is I gave a speech on the floor yesterday about this where we talked about that very issue and ensure that people understand that is not the intent of the legislation. And so the Congressional intent, the legislative intent needs to be clear. Treasury also needs to help us. I hope they’ll issue something soon – and I think they will – to clear that up. So I think it’s an important step forward in terms of ensuring that cryptocurrency is treated properly, but is not overly expansive.”

“The time bomb is the $3.5 trillion tax and spending extravaganza. This is a $548 billion infrastructure package – by the way, about one-third of the size of what President Trump proposed, $1.5 trillion – And it’s something that does not have any new taxes in it. So it doesn’t raise taxes, doesn’t hurt the economy. It actually helps the economy because it’s investing in long-term assets like roads and bridges, or ports, or rail.

“It also deals with something that there’s a great consensus on, which is to ensure we’re focusing on the digital divide with regard to broadband. So it provides an historic level of investment in broadband to get to communities like many in Ohio that are underserved or even unserved by Wi-Fi, certainly with the speeds that you need for school or work or health care. So there’s a lot of great things in here, it’s totally bipartisan. I noticed earlier you said ‘President Biden’s infrastructure package’ – it’s actually one that he supports, but it’s one that came out of a process here that was totally bipartisan. Republican input, Democrat input.

“In fact, we picked up a lot of legislation that was purely bipartisan. For instance, the Surface Transportation Reauthorization Act that came out of the Environment and Public Works Committee, the EPW Committee, which came out with 20-0 vote, that’s part of this package. So this is a totally bipartisan product that is going to help our economy, help create more jobs. It’s counter-inflationary, not inflationary. Most of the money won’t be spent, as you know, for years, because it’s for these long-term capital assets.

“So this is something good. And I give President Trump credit because for Republicans, he kind of put this on the radar screen when he talked about the need for infrastructure. He’s a developer. He gets the need to have strong infrastructure. And we have fallen behind in this country. We’re now ranked 13th or 14th in the world based on a survey that’s done periodically about comparing us to other countries. And everybody who looks at infrastructure says it does need this additional help, but it needs a shot in the arm right now. And that’s what this does.”

PORTMAN ON RAISING THE DEBT LIMIT:

“Well, I think the Democrats are able to do that with their own vote, since they’re the ones that added $1.9 trillion to the debt earlier this year. And they’re talking about adding another $3.5 trillion to the debt in this tax and spend package we just talked about. So they have the ability to do it through what’s called reconciliation. That’s what they would like to jam Republicans on again, as they did back earlier this year with regard to the COVID-19 package, most of which was not for COVID-19.

“So I think that’s something that is something, Andrew, that they can do on their own and they should, because they’re the ones that have pushed this debt to the point where it really is getting dangerously high.”

“Well, I don’t know what he was referring to, but I know that’s where the issue is, and this is something that Republicans, I think, are going to be unified about. So I can’t tell you what the outcome is because it will depend on a handful of Democratic votes. And those are some of the more moderate Democrats who realize that the high taxes are going to hurt the working families they represent. They realize that the spending time bomb that was talked about is for real.

“And so they’re, I think, going to be the ones who make that decision. And my hope is that we’ll end up with something that does not hurt our economy just as we’re trying to get out of this pandemic and does not create the inability for us to compete globally. Earlier, you guys talked about how it’s going to increase taxes, and someone, one of your commentators, said international tax reform. It’s not tax reform. It’s tax increases, it’s dramatic tax increases.

“If you look at the 2017 Tax Cuts and Jobs Act, it really worked. It reduced taxes in a way that generated unbelievable economic growth and also an opportunity economy in the sense that wages went up, lowest poverty rate since we started keeping track of it. Historically low unemployment for Blacks, Hispanics, and other groups. 50-year-low unemployment for other groups. And if you change that international side on the corporate side, you then make America’s workers less competitive again. And the tax increase they had in their first, so-called, infrastructure bill – which was $2.65 trillion – actually increased taxes five times more than taxes were cut in 2017. In other words it wasn’t just getting rid of the 2017 tax reform and tax cuts, it actually was adding new taxes to American workers. So my hope is they don’t go down that road because it would be terrible for the economy and for our competitive position in the world.”

“I think that’s something that the private sector ought to decide and not the government. I don’t think there ought to be a mandate by the federal government, or state government, for that matter. But I think for private companies, they can make that decision. I will say that if you get vaccinated, you’re going to be a whole lot safer. And so I will say, as I’ve said on this program before, I’m in the Johnson & Johnson trial, as you know. I got vaccinated very early to show my constituents that this is a safe and effective way to protect yourself.

“And the data is unbelievable. We just had some new data come in from Ohio. If you’re vaccinated, the chances of hospitalization and certainly death are extremely low, almost nonexistent with regard to people who tragically lose their lives. So this vaccine does protect you. And it’s incredibly important that people get vaccinated to protect themselves and their family and our communities and get people back to school and back to work so we can all lead a more normal life.”