In an interview this morning with CNBC’s Squawk Box, Senator Portman outlined the major differences between the Infrastructure Investment and Jobs Act – landmark legislation he helped negotiate to repair our nation’s crumbling roads, bridges, and other key infrastructure assets – and Democrats’ reckless tax and spending plan that will cost nearly $4.5 trillion.

Portman detailed his concerns with the Democrats’ reckless tax and spending bill, arguing that trillions in new spending and taxes will stifle economic growth, kill jobs, balloon the national debt, and increase inflation. 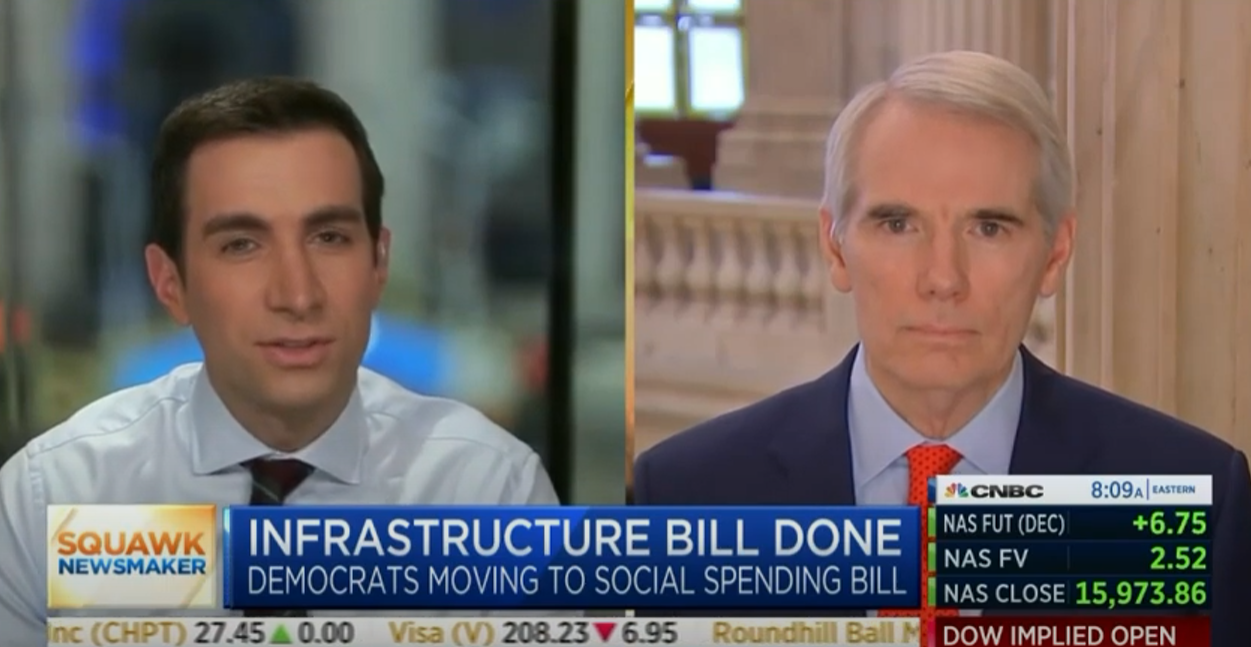 PORTMAN ON THE DIFFERENCES BETWEEN THE BIPARTISAN INFRASTRUCTURE BILL AND DEMOCRATS’ TAX AND SPENDING PLAN:

“In terms of the next bill, the Build Back Better? No, I think it's bad policy overall and certainly terrible policy at a time when inflation is so high and we have such a big debt and deficit. So, look, I don't think we should be raising taxes on the economy. I don't think we should be doing the stimulus spending. And you guys just talked about the fact that inflation is hitting everybody. The 0.9 percent inflation increase from last month annualized is over 11 percent. We'd be back to double digits for the first time in 30 years. So, look, I think it's exactly the wrong thing to do.

“Infrastructure is very different. That legislation, as you know, is going to be long-term spending. Very little of it will be spent in the next couple of years. When it is spent, it's going to be spent on long-term capital assets like that bridge in New Hampshire and other places. And that's going to be good for the economy. It makes our economy more efficient, more productive and leads to higher growth and more jobs.

“So they're very different pieces of legislation, which is why we always wanted to separate them. And we have now. We've passed the infrastructure bill, which is going to be good for the country. And I don't think we should move forward with the BBB at all because I think it's exactly the wrong remedy for an economy that’s already hurting in terms of inflation.”

“Well, that's up to them, isn't it? Because they've chosen to go on a strictly partisan way, which is sad. I think President Biden is trying to govern as though he's FDR. The difference is he's got a 50-50 Senate. FDR had a 69-25 Senate and a massive majority in the House of Representatives. So, look, we're equally divided here in the Senate. In the House there's a four-seat majority, and we should work together. And one good thing about the infrastructure bill is we did work together.

“It became more partisan toward the end because the House, frankly, House leadership tried to combine the two - the BBB bill with the infrastructure bill. They never should have done that. The pledge from the President was not to do that. But finally, it was voted on separately, and we saw it was able to pass. It had 19 Republican votes here in the United States Senate because it was negotiated by Republicans and Democrats alike. So I think that's a much better way for us to proceed.

“And you have to ask Democrats about what they're going to do in reconciliation, but let's be honest, Andrew, it has taken months longer than they expected it would because there are Democrats, more moderate Democrats in particular, who have serious concerns about raising taxes on the economy as we're coming out of this pandemic. About increasing inflation even more with more stimulus spending as we face increasing pressures and middle-class families all over America have higher prices for gas and food. So, look, I think it's the wrong way to go, but they're going to have to make that decision because they've chosen not to engage with Republicans on it.”

“Well, I think there's still a lot of pent-up demand. I heard Joe's conversation with regard to retail sales and why those numbers are still up. There's still a lot of pent-up demand out there. And plus, there's still a lot of money in the economy. That stimulus package in March, the $1.9 trillion, most of which had nothing to do with COVID, but a lot to do with stimulus, is still out there. And that's still generating a lot of economic activity. It overheated the economy, which is why we have this inflation, which is what Larry Summers, former Secretary of Treasury in the Obama administration, suggested would happen. And he was right.

“And many of us warned about that. So I think that explains a lot of it – pent-up demand. But I don't think it goes on forever. I think that's another point that was made earlier is that if we do have this continued inflation and wages not keeping up by the wages are not keeping up overall. When you look at the wage growth over the past several months, the wage growth is actually there, but it's not keeping up with these high levels of inflation. So I think we're in a situation where we need to pull back and stop spending so much on stimulus and focus on the long-term economic growth.”

PORTMAN ON HIS SUPPORT FOR JAY POWELL:

“Well, I think that from what I know about where Ms. Brainard would be in terms of the monetary side of things, I would prefer to stay with Jay Powell. I think he is less dovish and more likely to deal with the inflation issue. The Fed's got two jobs. One is unemployment, the other is inflation. And I would hate to see us go expand the balance sheet even further at the Fed. And I’d hate to see us put even less pressure on interest rates because I think that would lead even more inflation. So I would stick with Jay Powell.”

PORTMAN ON COVID BOOSTERS AND HIS OPPOSITION TO GOVERNMENT VACCINE MANDATES:

“Well, Andrew, I think the private sector companies and the nonprofits, including the hospitals, should be allowed to make their own decisions. And that is the position I've taken from the start, back when people were saying that they shouldn't be able to do that. So I don't think there ought to be a government mandate. I think it would be left up to the private sector. But the incentive systems are working quite well in some companies, and they are providing monetary rewards. You're right. And that helps. So I think the incentive system is probably more effective and probably going to be something regardless of what happens with these court cases. I think you'll see more and more companies turn to that.”