In an interview this morning on CNBC’s Squawk Box, U.S. Senator Rob Portman (R-OH) discussed today’s procedural vote on the bipartisan infrastructure agreement. Portman believes that it’s more important that the legislative text is done right and is not rushed than to try and meet an arbitrary deadline. Portman went on to explain that negotiations are making great progress and a final product is expected soon. 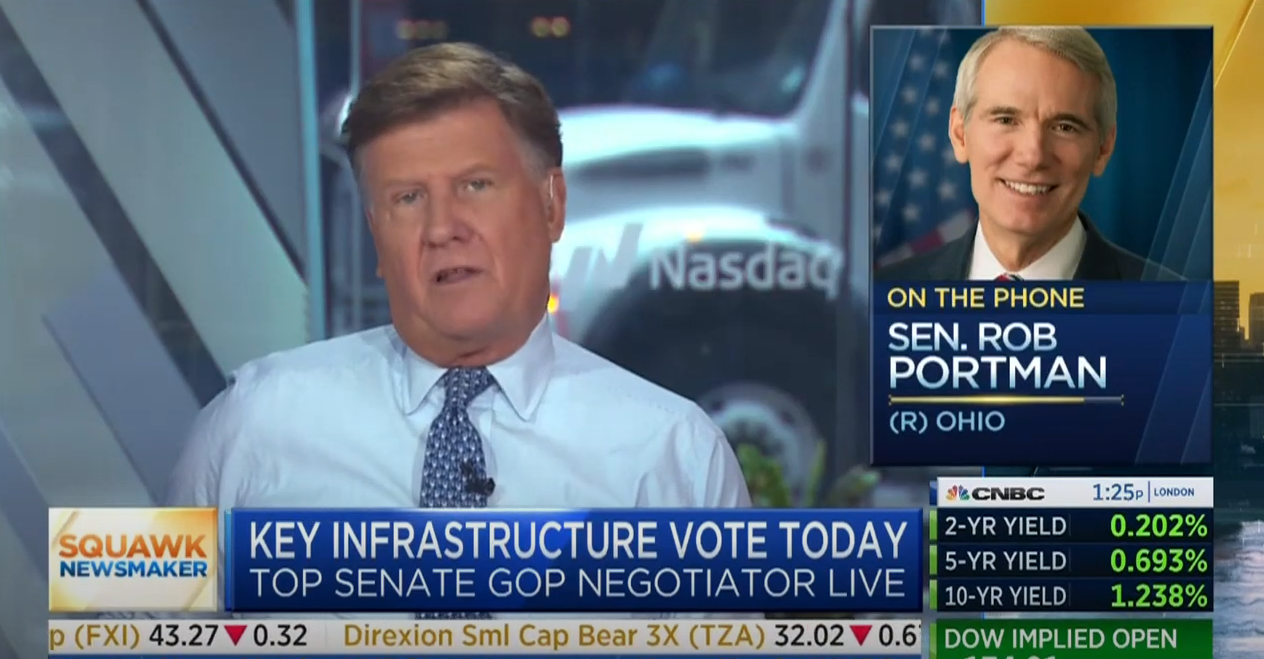 PORTMAN ON TODAY’S VOTE ON THE BIPARTISAN INFRASTRUCTURE AGREEMENT:

“We’re just not ready. I mean, the bill is still being negotiated, and so yeah, we’re not going to uncork the wine and or the Little Kings, Joe. So it’s going to take a little more time. And we always knew that. I mean, for the last week we’ve been saying there’s no way we can pull this thing together by today. Chuck Schumer is the majority leader. He can set the schedule however he wants, and he chose to have the first vote today.

“We’ve told him we’re not ready. So we’re going to vote no, but we will be ready by the end of this week, and we’ve always thought that. And we still have four or five issues we’re discussing with the White House and negotiating with our Democratic colleagues and Republican colleagues who are intent upon getting it done this week.

“Yeah. I mean, what they’d like to do is be able to say today we’re not supporting it. We are. We just want time to get it right. It’s too important for us to rush a vote here for an arbitrary deadline. So today, we’re not going to be able to support moving forward. We will be able to on Monday. And I hope that’s what the majority leader decides to do, is to put this vote off till Monday. If he doesn’t, he will offer the vote again on Monday, I believe, and we’ll be ready to go.”

“But this is great for America. This is good for the country. It’s exactly what we need to do, not just to fix our infrastructure, but to give the economy that long-term economic growth that it needs. This is actually the opposite kind of spending, the economists have looked at it – you know, Doug Holtz-Eakin, I know you know, the AEI economist – and have said that this is actually going to help on the supply side, not the demand side, meaning that it’s actually going to be counter to the inflationary pressures that we’re seeing right now. This is about long-term investments. This money is going to be spent over the next 10, 20 years for assets that are going to last for 50 or 70 years. This is about the Brent Spence Bridge, Joe, and it’s about other long-term assets that desperately need help. Everybody agrees with that. So we’re going to get this done and it’s going to be good for America.

“The other stuff, reconciliation is likely to happen. That’s the $3.5 trillion monstrosity that’s got the spending spree and it’s got this tax increase that’s the largest in American history. No Republican is going to support that. And frankly, some of the Democrats on our panel, as you know, on the groups that are working on this, are not wild about it. So if anything, this is going to help in terms of more skepticism about what’s left. The good stuff is going to be in this package.”

“Well, again, Democrats are doing that one through what’s called reconciliation, which basically just means they need 50 votes instead of 60....We’re going to do everything we can to stop it, because it’s terrible policy. I don’t think it’ll get a single Republican vote, as I said earlier. But I do think that there is also a number of Democrats who, you should talk to them, but they have concerns about it.

“And that includes some of the members in our group. And they have concerns because this thing is outlandish. I mean, it’s the first time in the history of the country where we’d be raising taxes this high and it’s also the first time in the history of our country we’ve set up these kinds of entitlements since the New Deal. So it would be a major shift in terms of our country and in terms of how our economy works in terms of the free enterprise system.

“And it’s likely, I think, to get into a serious negotiation with some Democrats who don’t support all that. But in terms of Republicans, I think we are all going to vote no and all going to do our best to try to stop it.”

“Well, it’s not linked, not just with regard to the negotiators, but with regard to the White House and with regard to our leadership over here. It’s totally unlinked. It has nothing to do with one another. They’re going to go ahead with reconciliation no matter what, Joe. And they always were, and we understand that.”

“Well, at that moment, everything was fine because it was two hours before [President Biden] changed his mind and said that we were now going to have to have these two bills go together. Later, of course, he reversed course on that. Thank goodness, because they’re totally independent. I mean, this is the infrastructure package that is built from the middle out. It’s totally bipartisan. It’s very responsible. It has no tax increases, as you know. But it also funds something essential, which is the infrastructure that’s crumbling around America.

“We know that our infrastructure is in tough shape. We get a grade of C- Joe, which is even a lower grade than I got in high school and college in economics. But it’s clear that the American people believe that, too, by the way. CNBC, which is, of course, a great source, has a poll indicating 87 percent of the American people back a bipartisan effort to fix our roads and bridges.”