This morning in an interview with CNBC’s Squawk Box, Senator Rob Portman (R-OH) discussed the Democrats’ reckless $3.5 trillion tax and spending spree, underscoring how it would hurt the economy, job creation, and working families who are already paying higher prices at the pump and in grocery stores because of surging inflation.

Portman noted that Democrats’ passed a $1.9 trillion spending bill and are gearing up to force through a $3.5 trillion bill – the largest in American history – without a single Republican vote. As such, it is unreasonable to expect Republicans to step forward and raise the debt limit – which would effectively enable Democrats’ to continue pushing their partisan spending bills. 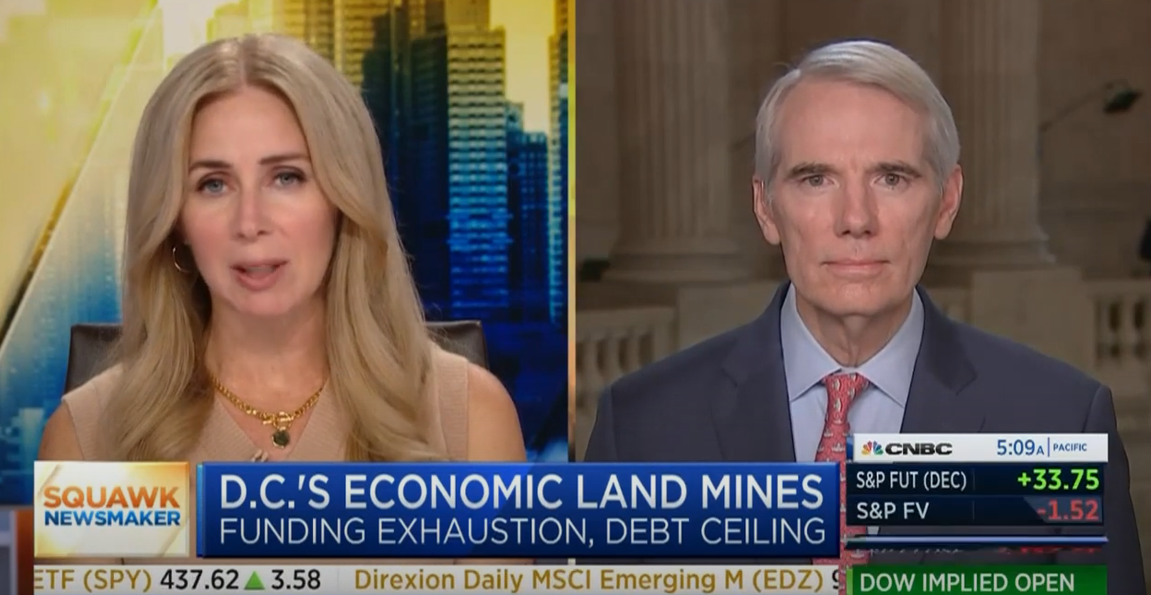 PORTMAN ON DEMOCRATS’ OUT-OF-CONTROL SPENDING AND THE DEBT LIMIT

“It is at the end of October, as you said. So we’re not up against it. And typically we do wait until we are up against it. So this is putting the CR, which is the September 30th deadline, along with the debt limit. So it’s not necessary to do it now.

“Second, Becky, let’s face it. This is all about debt that has been accumulated since August 1st because we had a debt limit increase until that point. The vast majority of that is spending that Democrats have insisted on over the objections of Republicans. Remember the $1.9 trillion package that was passed in March. And now they’re talking about $3.5 trillion, really probably closer to $5 trillion when you look at it honestly over 10 years, again without a single Republican vote.

“So that’s the argument, and I think it’s a very logical argument. But the part that I like is that the debt limit actually forces us to make some of those fiscal decisions. In the previous segment, the comment was made about fiscal policy more broadly. I mean, you think about it, the only time we’ve actually reduced spending is in the context of debt limits. So that was how the sequester happened. That was how Gramm-Rudman happened back in the day. So I do think it’s the opportunity to have that broader discussion about the fiscal crisis that we’re facing as a country.

“Well, it would be a bipartisan agreement to deal with the spending going forward. So the CR that is being sent to us is just to continue the level of spending from last year, it probably has a few anomalies, as they call them, or exceptions to it. But that’s really not the answer. That would be kicking the can down the road for another couple of weeks probably, maybe into December at the most. But we’re not dealing with the actual spending of the country through the twelve appropriations bills. So we have to have an agreement on that. And that agreement ought to come along with the debt limit. And we ought to be able to once again say, ‘Okay, let’s put some caps on spending here, given the fact that we’re approaching a $30 trillion debt in our country, given the fact that this year’s deficit again is going to be near record levels, and given the fact that Democrats want to spend another $3.5 trillion dollars in that context, despite the fact that the economy is picking up on its own. And if anything, the biggest concern in our economy today is inflation as you guys talk about constantly. And the $3.5 trillion is just going to exacerbate that inflation, make it even worse. So I think it’s time for a discussion. And the debt limit tends to be the place where that discussion happens.”

“Yeah. I mean, honestly, Andrew, I was surprised to see the Ways and Means Committee report that out because I thought that they were going to get rid of carried interest altogether, which is what they talked about. And by the way, they also raise capital gains. They also increase taxes on small businesses, because if you’re a pass-through entity, you’re going to get hit with the individual income tax increase, which is pretty dramatic. So it’s kind of a combination of a number of things. But yeah, I agree with you. I was kind of surprised that they didn’t do what they said they’re going to do. It doesn’t mean it won’t happen. In fact, I think it’s more likely that the Senate Finance Committee Democrats here in the Senate, that they’ll probably add that to it. I’ve even heard discussion, Andrew, they’re going to do it in the Rules Committee in the House. In other words, they’re going to add that to the bill, along with doing something on SALT – the state and local tax deduction. So we’ll see.

“The problem with all of this, when you combine it, they’re kind of trying to fit 10 pounds of sugar into a one-pound bag in terms of the spending. And then on the tax side, they’re really putting at risk this recovery. And the recovery is going better than anybody expected in a way – I mean, CBO, the nonpartisan Congressional Budget Office, said we’d be back to about pre-pandemic levels at mid-year. We were. Inflation is our big issue right now, and the workforce, and you can’t exacerbate those problems by doing more stimulus. That’s the wrong thing to do right now.”

PORTMAN ON THE NEED TO PASS THE BIPARTISAN INFRASTRUCTURE BILL

“Well, I would really hope the infrastructure bill passes. Again, it’s good for the country, and it has a lot of priorities that Democrats and Republicans alike think are important. So let’s have a win for our country right now. I look at what’s happening at the crisis on the border. I look at what happened with Afghanistan, what continues to happen in terms of the way in which the chaotic withdrawal caused issues with regard to evacuees that are now in our country. I look at what’s happening globally right now with America’s prestige. And I look at the fact that inflation is eating away at any wage gains that people are seeing pretty much.

“So we’ve got a lot of issues right now. And wouldn’t it be nice to have a bipartisan win and do something that’s good for the country long-term and puts us in a position to be more competitive vis-a-vis China and other countries? And that’s what infrastructure is. That’s what we ought to do. President Biden supports it. Republicans support it. We had 19 Republicans support it in the Senate. So my hope is we can get that done. And if we do, it will be a win for not any political party, but a win for America.”