In an interview this morning with Bloomberg’s Balance of Power, Senator Portman outlined his concerns with the Democrats’ reckless tax and spending bill, arguing that trillions in new spending and taxes will stifle economic growth, kill jobs, balloon the national debt, and increase inflation. He also highlighted the negative impact surging inflation is having on workers and middle-class families. 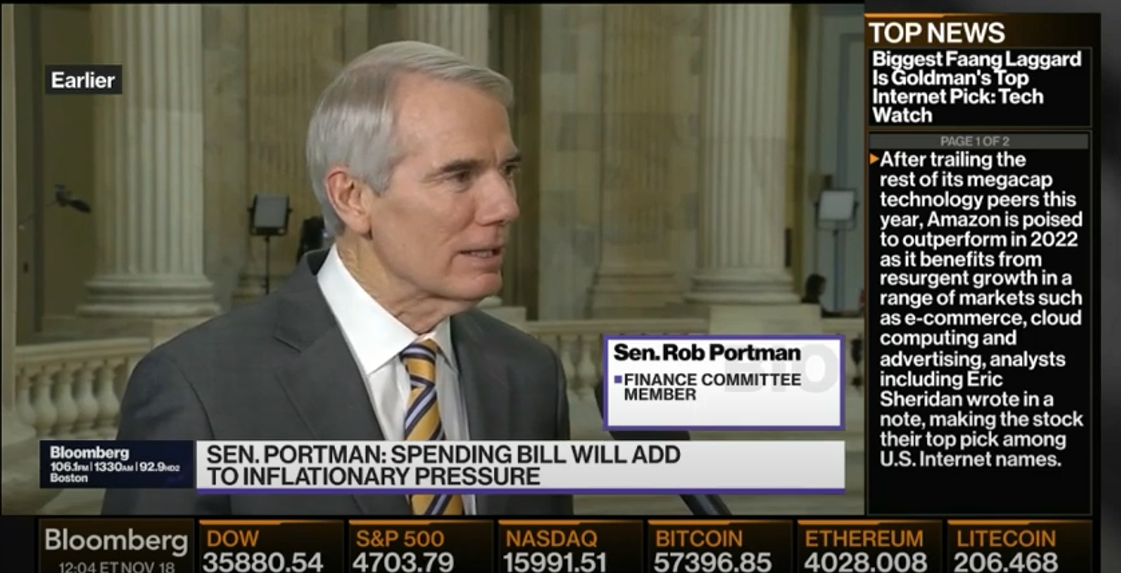 “They're wrong about the lowering costs. In fact, it will increase costs for everything because it will add to the inflationary pressure we already have in our economy. If you look at what happened in March when the $1.9 trillion bill was passed, it added more demand to the marketplace, more stimulus spending, which put a lot of pressure on inflation. By the way, that was predicted by a lot of people, including a lot of smart economists on both sides of the aisle. Larry Summers being one, former Democratic Treasury Secretary for President Obama. A lot of us raised that concern, and we're seeing it again.

“So with the high level of stimulus spending in this second bill, this is the so-called Build Back Better legislation, or also called the reckless tax and spend bill, also called the reconciliation bill, there won't be a single Republican supporting it. It will be a partisan bill that's jammed through the process, and it's going to add to the inflationary pressure we already have. So it's kind of scary. We had .9% inflation increased last month. If you annualized that, that is 11.4% or so. Double digit inflation is what we're looking at right now. We haven't had that for 40 years. So it's a serious concern.

“Second, of course, it has big tax increases that'll hurt our economy right now. And then finally, of course, it has significant spending that's not offset. We don't know how much yet. It's somewhere between, I think, $270 billion and $3.5 trillion dollars, depending on how you look at it. But that's just adding to our debt and deficit in ways that do not add to economic growth and therefore more revenue coming in through growth.

“All of this is in contrast to the infrastructure bill, which is long-term spending. Much of it won't be spent for the next 3 or 4 or 10 years even. And that goes into hard capital assets, adding to the supply side of the economy, which should be counter inflationary.”

“But look, we have a situation now where our debt is approaching $30 trillion - unprecedented, not just in terms of the nominal amount, which, of course is the most ever, but as a percent of our economy. We have raging inflation. If you ask folks what their number one concern is back in Ohio, they'll tell you it’s the price of gas. I filled up my pickup last week and it was $100. People just are blown away by the inflation numbers, cost of groceries and so on.

“So that's what we ought to be focusing on right now and to add new social programs at this time, to me, is a mistake. By the way, we just did it again in March, $1.9 trillion of spending. Put that into context, we have about a $4 trillion budget. We've spent more in the first seven to eight months of the Biden administration than we normally spend in an entire year's budget.”

“We'll see. It's a 50-50 Senate, and it's very ambitious to get something like that through a 50-50 Senate. It's equally divided. Not a single Republican will support it because of the tax increases, because of the high spending, because of its impact on inflation. So it's not up to me. It's going to be up to Democrats like Joe Manchin and Kyrsten Sinema. They're both fiercely independent senators, and they want to do it right for their constituents in the country. So we'll see how it ends up.”

PORTMAN ON THE DEBT LIMIT:

“Well, we cannot default. And Democrats control the White House and the House, and effectively the Senate, because although it's a 50-50 Senate, because of the tie vote by the Vice President, they have control of the Senate. So they have the ability to do it on their own.”

“And they know that. And again, if you add the $1.9 trillion, which no Republicans supported, to the next bill, which may be somewhere between $2 and $6 trillion, depending on how you look at it, that's the main reason you need to raise that ceiling. So they need to make space for that. And I would think they'd be happy to do that.”

“Well, it's always a partisan issue, and it's a tough one. And I was one of the eleven Republicans who voted to stop debate and allow a vote on it several weeks ago because we cannot default. We shouldn't default. Everybody knows that. But I think it's important that Democrats take responsibility here. They have the ability to do it. They are in control, and it's to make room for their spending, that we need to raise the debt limit as high as we do. So I think that's the better way forward.”

PORTMAN ON THE NEXT CHAIRPERSON OF THE FEDERAL RESERVE:

“Well, I'm a Jay Powell supporter. I am concerned about what the Fed has done in terms of, particularly its balance sheet, expanding its balance sheet at a time of high inflation. So I think of the two of them, Jay Powell is better equipped to be able to deal with that issue. I also think he has more trust and respect among the markets, which is going to be important as we get into these tough times where we're looking at inflation, looking at what to do on interest rates and so on. So my hope is that the President will nominate Jay Powell and that we can find the votes here to confirm him.”