Last week, Senator Portman traveled to Lithuania to reaffirm America’s commitment to our partners in the region and to meet with Belarusian opposition leader Svyatlana Tsikhanouskaya and Lithuanian Foreign Minister Gabrielius Landsbergis. 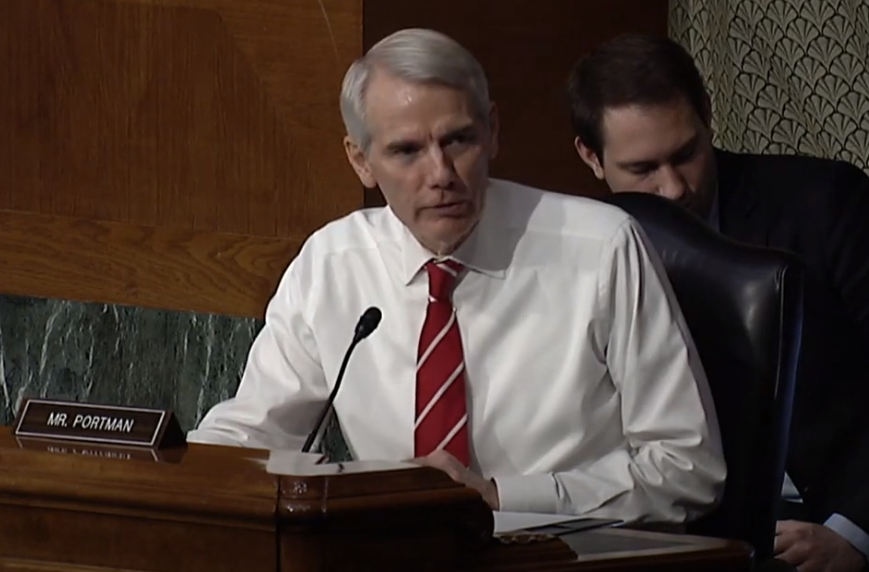 Senator Portman: “Thank you, Mr. Chairman, and thank you, Ambassador. I appreciated your opening statement and the opportunity to hear some of the back and forth. I was privileged to go, as you know, to Lithuania last week with Senator Shaheen and Senator Murphy, and have a chance to debrief with the Lithuanians about what’s going on in Belarus. You’re not there because you can’t be there. We weren’t able to go there. But on the other hand, we were able to get some good input, including, as you know, from Ms. Svyatlana Tsikhanouskaya, who we’re going to hear from in just a moment.

“I guess my biggest takeaway was the degree to which Russia is using Belarus as a staging ground, in essence, for their military and the impact that has on the region, in particular, the northern border of Ukraine. Ukraine already has an eastern border they have to defend and Russia has recently sent over 100,000 troops to that region, including equipment, which would indicate that they have designs to come back since they left the equipment there, and now they have to worry about their northern border as well. Can you talk a little about the Russian intentions in Belarus? I understand they have a couple of bases already and they’ve asked for a third base. Talk a little about their military posture and what you see as the likely scenario with regard to Russian involvement in Belarus.”

The Honorable Julie Fisher, United States Ambassador-designate to the Republic of Belarus: “Thank you Senator and thank you again for taking part in the trip last week. It was so important to both the democratic opposition, to our allies, and to our efforts. In terms of Russia’s role, particularly as you mentioned militarily, I would start by saying that again it is Lukashenko’s willingness to increase dependency on Russia in every possible sphere that has brought him to the point of being in no position, really, to barely having a say in what it is that Russia would decide to do militarily in Belarus. There has been an integration of military and security forces over the decades of his tenure. It’s important to acknowledge that Russian troops in Belarus, that’s not new. Russian troops have been in Belarus for a long time. The question is how many more?

I would also acknowledge that this year is the year of the major Russian military exercise, Zapad 21, which we are watching very closely to see how this exercise will unfold, what kinds of troops and equipment move into Belarus, and how much of that leaves. The Zapad exercise is one that NATO, in particular, pays very close attention to. And we will continue to do that this year.”

Senator Portman: “Can you confirm that Russia has requested another base in the country?”

Senator Portman: “Can you confirm that Russia has asked for another base in Belarus?”

Ambassador Fisher: “I can’t confirm that. No.”

Senator Portman: “That’s what we heard in Lithuania. And I thought we heard from both our U.S. ambassador and also from the Foreign Minister. With regard to sanctions, we talked about the need for shifting to more effective means of persuading Belarus to stop some of their malign activities, including, obviously, in response to the Ryanair jet incident. My question for you is do sectoral sanctions make more sense? And if so which sectors would be most appropriate to be focused on? And what difference would it make?”

Ambassador Fisher: “Thank you, sir. I think in a state-run economy, which Belarus is – 70 percent of the Belarus economy is controlled by the state, it’s a very Soviet-style economy – I think it is important to acknowledge just how important sectoral sanctions can be to depriving the regime of finance and funding that is used to inflict violence on the people and I believe that it is the clearest signal that we can send of our rejection of these tactics. So I believe the new executive order and the work that the White House has directed that is under way now, we are working through targets.

“It is very important, as we work through this process, that we take a very careful and thoughtful approach with regards to understanding the impact that we will have on the desired targets, that we understand the impact to the people of Belarus who could feel the effects and that we understand the impacts to American interests as well and to that of our allies and partners. So I’d like to assure you that we are going through a very thoughtful process and that we are working through that with due speed and a sense of urgency.”